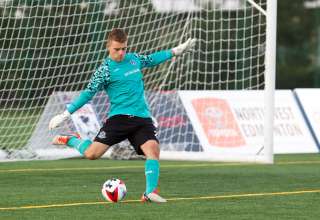 When it comes to goalkeeping, stopping shots is what makes the highlights and game reports. We talk very little about the other things that come with the position, namely playing the ball. From goal kicks to handling pass-backs, the keeper is required to make good decisions when the ball comes to his feet.

But, in the past, I’ve seen keepers lose their jobs because of their inability to play the ball out of the back.

This brings us to FC Edmonton keeper Tyson Farago. When it comes to a heavy kicking foot, the only NASL keeper I can remember hitting the ball for the same kind of distance as Farago does was Daniel Illyes, who played for the Atlanta Silverbacks in 2012 and ‘13. Matt VanOekel, the Eddies starter in 2015 and ‘16, could hit the ball really well, and he was the best in the league at it last season. But Farago’s delivery borders on ridiculous. Think, Mighty Steel Leg from Shaolin Soccer.

Last week, Farago launched 80-yard kick after 80-yard kick into the heart of the New York Cosmos defence, daring the centre backs to get decent first touches to the rockets being fired at them. And, often, the ball would be tracked down by the Eddies forwards and resulted in good looks on goal. Tomi Ameobi got a couple of clear breaks on goal after long Farago bombs down the field.

So, when will Farago decide “hell with it” and try to score from nearly 100 yards away?

“I always talk about it during practice,” Farago said with a smile after Friday’s training session. “One day, the wind will be right, the moons will align, and I’ll connect with one and catch the keeper off guard.”

We can talk all we want about tiki-taka football, but route-one soccer will always have its place. And a good team will be one that can vary its attacks; it can play on the ground, but, if things get too congested in the middle of the park, it can also spring a ball over the top and try to get behind the defenders.

Farago said that having strikers Ameobi and Daryl Fordyce at the top of the formation makes it all the more effective to go over the top.

“With the height of Tomi and Daryl really add to it,and the pace of the both of them, they really run off each other and it’s definitely a weapon to utilize and we took advantage of it (last) Friday there. It was a great advantage in the game.”

It might be more difficult this weekend for the Eddies to deliver the over-the-top ball. Puerto Rico FC is in town this weekend to face FC Edmonton (1-1-1 in the fall season), and feature one of the biggest lineups in NASL. Heck, PRFC looks more like a rugby team.

“They are a big side,” said Eddies coach Colin Miller. “They’ve got some great athletes on their team, but I saw some things Wednesday night when they played against Jacksonville, areas that we can expose and we’ve worked on that a little bit here this morning as well. I think it will be an entertaining game, Puerto Rico have shown already with wins away from home that they don’t sit back and defend. “

And, while PRFC, who currently lead the NASL fall standings, played in Jacksonville heat on Wednesday, Miller said the Orange Agents might recover better than most NASL teams.

“I think between the two of us (PRFC and FCE), we’ve easily got the best Air Miles in the league  and possibly the continent. They’re used to travelling. It doesn’t faze their players at all.”

FCE winger Sainey Nyassi suffered a knock to the head in training earlier this week. Miller said that it will be a “game-time decision” whether or not Nyassi makes the squad for Sunday.