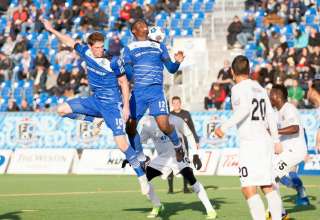 Weeks ago, the Eddies coaching staff had discussed the scenarios: If the Eddies were out of the chase for the post-season in the final week of the NASL campaign, Tyson Farago would get his professional debut.

And Farago got the win between the sticks as the Eddies got a 2-1 victory — a triumph that gave the supporters at Clarke a nice send-off, but also added to the “what could have been” dialogue in the wake of last week’s loss to Fort Lauderdale on a late, self-inflicted goal.

Farago deserved a ton of credit for getting the Eddies the three points they needed to finish third in the NASL fall season table. After the Silverbacks cut the lead to one, Farago made a fantastic leap to parry Pablo Cruz’s dipping shot over the bar. And he came out of the goal to block an effort from Ryan Roushandel, who found himself alone at the far post.

Farago also got some help from Nonni, the scorer of the Eddies’ second goal. Roushandel looked to have sent the tying marker goalward, but Nonni headed it off the line and out to help preserve the win.

“The plan was always to give Tyson a chance to play the final game,” said coach Colin Miller. “And he did very well out there. Unfortunately, he’s been relegated to being a training-ground keeper, because we are in the middle of nowhere and we can’t find decent reserve games. But he went in there today and I thought he did fantastic, and he can kick the ball further than I can drive my car.”

The Eddies should have had the game won at halftime; the 2-0 scoreline flattered the Silverbacks, whose defending and midfield play were non-existent for long portions of the first 45 minutes.

The Eddies opened the scoring in the 17th minute. Eddie Edward launched a cross into the box; Atlanta defender Edgar Espinoza decided to move away from his man, Tomi Ameobi, to try and cut off the cross. But, when the ball came down, Espinoza couldn’t get close to the ball. And, because Espinoza left Ameobi behind, the Eddies striker had plenty of time to chest the ball down and blast it inside the post.

Then, Eddies’ midfielder was ruled to have been brought down in the box by Atlanta defender Ramiro Canovas. Hlavaty’s penalty was too close to keeper Thomas Hunter, and was saved.

But Espinoza was soon back at it — first, despite having goal-side, ball-side position, he allowed Lance Laing to get around him and lob a ball over Hunter. Atlanta defender Abdul Bangura cleared the ball off the line. But the Eddies collected the ball, and Edward pumped it back into the box — where Daryl Fordyce cushioned a header in the path of Nonni, whose diving header found the goal. Fordyce was Espinoza’s man and was allowed a free header to get the ball to Nonni.

“I thought, when I was in the air, ‘shouldn’t I be kicking it?’” said Nonni. “But it worked out OK. I’ve been snakebite this year. My first league goal — and it only took me about 20 games.”

When the Eddies and Silverbacks heard the halftime whistle, Miller was unhappy that the Eddies weren’t up by four or five over a team that’s future is uncertain.

“No disrespect meant to Atlanta, but that’s a team here that’s waiting to be beaten.”

The Silverbacks have not confirmed if they will return to NASL next season, and speculation has the team moving, self-relegating to a lower league or folding altogether.

But, if the second half in Edmonton was the Silverbacks’ final 45 minutes of play in NASL, at least they can say they came out with a heck of a lot more fire than they offered in the first half.

A photo finish was set up when, off a corner, Abdul Bangura won the ball in the air; the ball then went to his cousin, Shaka Bangura, who nodded home from six yards out.

The Eddies finished nervously — but thanks to Farago and Nonni, held on.

SMITS IS GOLDEN?: By sitting out the final game of the season, John Smits has clinched the NASL Golden Gloves award (at least by my math).