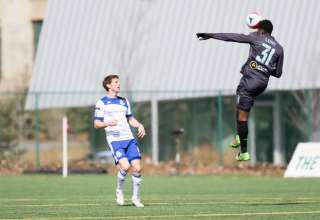 Think back to two weekends ago; FC Edmonton played its NASL season opener in Oklahoma City. Before the Eddies went down to 10 men, they had a fantastic chance to open the scoring. Sainey Nyassi took the ball down the wing, as the Eddies were on a two-on-one break. Striker Daryl Fordyce was streaking into the penalty area.

Nyassi’s cross missed Fordyce badly — and the Eddies and Rayo OKC went on to play a 0-0 draw.

Last weekend, at Clarke Field, the Eddies were down 1-0 to Minnesota. Pablo Cruz threaded a ball into the penalty area for FCE striker Tomi Ameobi. But, Ameobi was only able to flash his boot at the ball, and couldn’t redirect that pass into the goal. Had the Eddies equalized, it could have been a momentum-changer. Instead, Minnesota only grew stronger and went to a 2-0 win.

Those two chances are prime examples of what FCE coach Colin Miller is seeing go wrong with his team’s attack; the Eddies are getting into good, dangerous areas. But when the chance comes, the quality of that final ball is disappointing. It’s a habit the players hope to correct when they visit the Tampa Bay Rowdies Saturday.

So, how does the team improve? Practice. And then, practice some more.

“Repetition. Put the players in the same areas,” said Miller after the Eddies training session Wednesday. “Even here this morning, the blue team played against the orange and got into some fantastic areas, but once again, the pass was overhit, the cross was short, the strike wasn’t on target, whatever it is.”

But scoring goals is instinctual; it can’t be as easily mapped out on a whiteboard as, well, preventing goals.

“The easiest part of the game, I believe, is organizing the team defensively,” said Miller. “The hardest part of professional sports is putting the ball in the net or the puck in the net. And we’re, for the most part, doing the defending right, although big Matt (keeper Matt VanOekel) made three or four very good saves on Sunday. But all we can do is put the players that we hope will be key players in the same areas and repeat these opportunities.”

Fordyce admitted that going through 180 minutes of NASL play without a goal is frustrating.

“Not getting on the score sheet, as a team, so far, we have to forget about the last two games and move on. The first game we were playing with 10 men but we had a couple of chances when we had 11 men. But it was just the final ball. And, Sunday we just didn’t show up and we were beaten by the better team. But we have to put all of that behind us, now, and focus on Saturday’s game against Tampa.”

Fordyce said that even in the top levels of world football, the best teams and best players go through slumps.

“As long as you keep working hard, doing the right things, eventually it will come.”