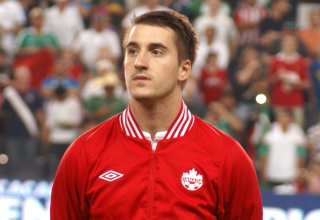 Philippe Davies will be reunited with former Whitecaps’ teammate Long Tan — in Division 3, with the Richmond Kickers of the USL.

The team announced Friday that it had acquired Davies and got Tan on loan from D.C. United.

“Philippe is a welcome addition as we look to secure a playoff spot,” said Kickers head coach Leigh Cowlishaw in a statement posted on the team’s website. “He is a mobile and attack-minded individual who is comfortable playing anywhere in midfield. We look forward to him making an immediate impact for the team.”

Davies was on the Whitecaps roster throughout its inaugural MLS season, but the Quebecer never got the chance to play in an MLS game. He wasn’t brought back for 2012. He joined the Whitecaps program in 2007, and made his Div.-2 debut for the team in 2009, and was signed to make the move from Div.-2 to MLS with the team.

Davies was part of the U-23 Canadian team that got to the semifinal stage of the CONCACAF qualifying tournament for the London Olympics.

Tan, after expressing his displeasure about his lack of first-team playing time on Twitter, was traded by the Whitecaps to D.C. United on June 28. In a case of “be careful what you wish for” Tan arrived at a club that was already very deep at the striker position. So, to get the Chinese striker playing time, he was loaned out to Richmond.