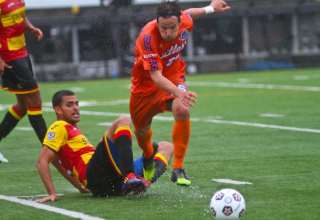 Former FC Edmonton and Montreal Impact players are being hinted as the key parts of a Quebec “national” team that will compete in a Marseille tournament at the end of June.

In a release issued Thursday, Quebec coach Patrick Leduc indicated some of his top choices for the squad that will participate in the Tournoi international des Peuples et des cultures, which kicks off June 23 in Marseille, France. Regional, French-speaking teams from India, Tibet, the United Kingdom and France are among those confirmed to be taking part in the tourney.

Leduc indicated that fullbacks Alex Surprenant and Fabrice Lassonde would both be top choices for the Quebec team. Surprenant is a left back known for his free-kick abilities. After leaving the Impact, he spent the 2011 NASL season in Edmonton. He was released and, ironically, replaced by Lassonde, who played about half of the 2012 season with FCE before he and the club came to an agreement to part ways.

Nicolas Lesage, a striker who was signed by the Impact but spent the majority of his career with the Trois-Rivieres Attak, where he became recognized as one of the top finishers in the Canadian Soccer League, is also on that shortlist.

The Marseille tournament is in preparation for the Marseille Sixth Viva World Cup in 2014; that’s a tournament designed to allow countries and “cultural representations” to come together. So, regions like Quebec, Tibet, Kurdistan or Catalonia (which hasn’t participated in the past but is eligible) would be recognized as national teams. The organization is proudly “non-FIFA.” For more on non-FIFA, CLICK HERE.