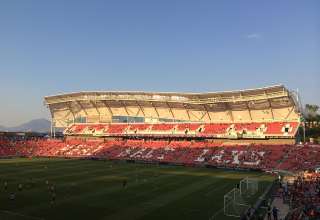 In the last few years, this site has distanced itself from the United States; basically, we cover NASL and MLS and the other leagues we share with Americans — when the stories relate to a Canadian audience.

But, today, I’m breaking that rule. Because I’m gonna wade into the world of ethics, sports journalism and where we are today.

As you may have heard, MLS side Real Salt Lake made the decision this past weekend to strip Salt Lake Tribune columnist Gordon Monson of his credentials. Monson has been critical of the team’s ownership in past columns (an example can be found HERE). The paper responded by not sending staff to cover this past weekend’s RSL match, choosing to write a reduced game report straight off a television broadcast.

In a statement, Andy Carroll, RSL’s chief business officer, said that the club felt that Monson could write his columns without having to go to the stadium because “he clearly needs no semblance of reportage or journalistic integrity upon which to arrive and share his view.” Carroll then went on to state that it represented a conflict of interest for Monson to cover RSL because he did radio work with a relative of the team’s former owner and, this is key here, because he gets paid by what Carroll called a “competing professional team in the marketplace,” the NBA’s Utah Jazz.

What about the Vancouver Whitecaps and the expansion LAFC? Don’t they both have owners who earned their money thanks to lucrative NBA careers?

As well, I think it needs to be stated that the reason MLS exists is because, in the 1990s, a lot of owners who made their money in the NFL — another competing league — decided to invest their money in soccer. Basically, and this conversation exists outside of the decision to ban Monson, by calling the NBA a competitor that creates a conflict of interest, RSL’s front office is talking out both sides of its collective mouth.

(Full disclosure, here. In 2010, RSL paid me to provide colour commentary for a radio broadcast of a Toronto FC/Real Salt Lake match. As well, I have covered the club in the past for the Deseret News in Salt Lake City, as an independent freelancer; I have had no issue in the past with access to the club.)

There is another issue that Carroll raises; by calling a team that plays another sport in the “marketplace” a “competitor,” he only rekindles the flames of the soccer-vs.-everything-else disease that hurts the game in North America.

The soccer communities in Canada and the United States have always had an issue with how insular they are. The stereotype of the soccer snob or hipster who always has to put down any other sport in North America continues to stay strong. Every Super Bowl Sunday, it’s like clockwork; you’re barraged by tweets from the soccer snobs about how the Super Bowl isn’t that big, it’s not global, and isn’t watched by as many people world wide as (place soccer tournament/team here). So boring, unnecessary and, boy it makes soccer fans look whiny.

It’s a sad affliction of insecurity that plagues us; sure, soccer fans have taken their fair share of abuses in comment sections and chat rooms about diving/sissy sport/boring/no goals/diving/diving/diving, but the truth is, many of us are more than happy to return fire and keep putting up barriers between soccer and other sports. It’s sad, really – it makes us feel like a gated community. Don’t dare send a new reporter to cover the MLS/NASL team — we’ll chew that person up for “knowing nothing about soccer!” Don’t dare let anyone else other than “soccer people” talk/broadcast or write to soccer fans!

In that way, we totally and unabashedly suck.

Carroll isn’t helping. But let me tell you this; it’s not a crime to follow your local soccer club and also follow the baseball, basketball, football or hockey team. I have covered hockey for years, and am looking forward to the opening of the new arena in Edmonton. Does that mean my FC Edmonton work is compromised? No.

Now, let’s get to the delicate issue of teams that pay journalists to cover/commentate on their franchises.

But, in case you’ve been living under a rock, the media business has shed lots of jobs. And a lot of journalists will write for trade publications, house organs or league websites. They’ll commentate on radio shows paid for by the respective teams involved. It’s called putting food on the table. The key is transparency (like the fact I disclosed that I was once paid by RSL earlier in this piece). Never deceive your audience. What crosses the line is when a journalist being paid by a team or league portrays his or her work as a scoop or exclusive when, in fact, that writer is being paid by the subjects.

And, teams will send us press release after press release instructing us to make sure to use the corporate name of the stadiums. They instruct us to respect their sponsors.

Meanwhile, those sponsors are no longer advertising in the media — you know, the industry that puts food on our tables — because they can get what amounts to free exposure in many different organs because their names are on stadiums or shirts. So, in essence, the leagues are expecting us to be complicit in helping them raise money by offering free advertising for their naming-right sponsors in our spaces. So, basically, we’re told to respect their deals — but, in the RSL case, we’re censured for cutting our own deals. My solution is simple: If a league can tell us what constitutes conflict of interest, we should in no way ever use the league’s sponsors in our copy. Fair is fair.

Yes, I get the argument that these sponsors are vital to the survival of these teams and leagues that the sportswriters cover, but I wanted to illustrate just how complicated it all is.

So, when it comes to who is paying who, the lines have been blurred. Look, I would be more than happy if each reader decided to pay enough for each article he or she reads so that professional writers could make living wages without needing advertisers or patrons. But that’s not going to happen.

Finally, there is a professional organization, the North American Soccer Reporters, which is supposed to act in cases such as this. Basically, over the last several years, the NASR has just become a club where journalists pick the MLS Player of the Week. That’s fine — but the major function of an organization like the NASR is to step in when conflicts such as the RSL-Tribune schism arise. And the NASR’s silence on this has been telling. Maybe, as a whole, soccer writers can’t be bothered. And that’s a sad thing, indeed.