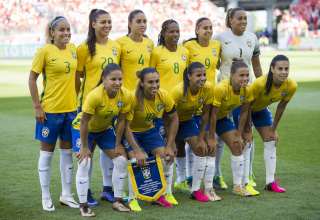 The scoreboard at Toronto’s BMO Field read Brazil 2, Canada 0. But, in this first of two friendlies against the Olympic hosts, the Canadian national women’s team played such an error-filled, undisciplined match, it’s safe to say that the scoreline actually flattered Les Rouges.

Brazil’s two goals, both from Marta, were the product of chain-reaction series of errors from Canada.

On the first goal, centre back Kadeisha Buchanan decided to leave her positional awareness behind, and came way out to the right sideline to challenge for a ball she should never have been near. She came out second-best in the 50-50 challenge, and venturing way out into the wing meant that wasn’t where she should have been when the Brazilians sent the ball into the centre of the penalty area. Now, Canada still should have been OK; Allysha Chapman had scrambled over from the fullback position to clear the danger. But, she fell over the ball, and Marta was left with an open net.

The second goal came after Janine Beckie slipped and lost the ball. But, there was plenty of chance for her Canadian teammates to recover. But, the entire backline backed off the Brazilian ball carrier. Buchanan, who usually relishes the challenge, backed off and allowed Marta to shoot. Keeper Stephanie Labbe dove to stop the ball, and it went under her.

Throughout the game, we saw centre backs Shelina Zadorsky and Buchanan playing so far apart from each other, you could have driven a train down the middle of the pitch. There was no cohesion in the back line, no sense that the players communicated with each other. And Buchanan wandered out of her position so often, you have to wonder just how much one of the world’s highest rated defenders actually trusts her teammates.

The Brazilians love to press the player with the ball — in numbers. They’ll often bring two players to press an opposing midfielder with the ball. But, time after time, the Canadians lost the ball in midfield; the Brazilians swarmed, and the poor ball handler realized that she had no short option, no quick-relief pass to get herself out of trouble. The Brazilians then won the ball like a pack of wolves descending on a wounded deer.

It was if the Canadian was horribly uncomfortable having to play on a grass surface; pass after pass was left short, and players caught their studs and fell in many critical situations.

Maybe this was a blip — a nervous team playing in front of a big home crowd. But, wait, this Canadian team just went through a home World Cup, playing in front of even bigger crowds in 2015. Sure, some of the players on display Saturday were not part of that World Cup squad, but there’s still enough of a veteran presence there to steady the ship.

The international book on Canada is that it struggles to score, but that it defends well. Well, Canada couldn’t score, but the defence was also terribly suspect.