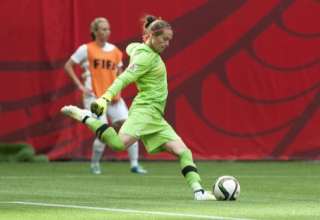 Canadian women’s national-team goalkeeper Erin McLeod had made the following statement regarding the status of her ACL injury.

To be frank, it’s pretty bad — about as bad as any Canadian fan would imagine. She won’t be available for the upcoming Olympics and, in terms of her recovery, we’re talking years, not months. And, as you’ll see in the statement, she says there are “no guarantees” that she makes a full recovery.

Here is her statement:

“Thank you to everyone for your sentiments and support. I want to apologize for not making a public statement until now about my injury, but I was waiting for all the information to make sure when I went public I was sure of what I wanted.

“First, I want to say how grateful I am to have the Canadian Soccer Association, the team, and staff, and of course medical staff behind me and supporting me every step of the way. I am also grateful for my current club, FC Rosengard, and all the support they have shown. It is clear to me that both parties are mostly interested in my health as a person first and foremost, and my life as a soccer player second.

“I tore my ACL in the Champions League semi-final game a few weeks ago. The biggest question is the Olympics and because I have already had two operations it makes a third one, well, extremely complicated. What I know for sure is I won’t be ready for August. My surgical options means it will take between one and two years to come back, and there are no guarantees, as there never really are in life.

“This news was of course heartbreaking because going to the Olympics is a dream as well as an honour. This Olympic team is one that will excite you, I know for me, it feels like I have been waiting for this group my whole career. The people on this team work harder than any other people I know, and, well, I know they will give anything for the emblem on their chests.

“As for me, family, friends, fans, thank you for your love, but know that I am grateful for every moment I have put on a Canadian jersey and this is not the end of the road for me – know that I’ve still got a lot of fight left and I hope to be on that field again someday soon.”