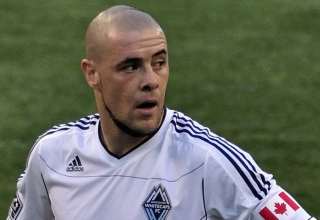 It’s not often you see a player sent off after scoring on a penalty kick. It’s not often that you watch a team, down to nine men, try to cling to a one-goal lead. But, if there’s anything Canadian soccer fans have learned through the first month of the Whitecaps’ tenure in MLS, they should expect the unexpected at Empire Field.

And, while the Whitecaps came back in stoppage time to draw Sporting Kansas City 3-3 on Saturday, they surrendered a 93rd-minute last-gasp goal to New England’s Ilija Stolica and had to settle for a 1-1 draw with the Revolution in front of 19,396 fans.

But the talking point won’t be the Stolica equalizer. It will be the bizarre sequence that followed Eric Hassli’s penalty-kick goal in the 56th.

Hassli was already carrying a yellow for an elbow that bloodied the nose of Rev Kevin Alston. But, like so many egotistical strikers do, he came into the game as a sub with two jerseys on, so he could peel one off if he scored.

Problem is, international rules state that a player gets an automatic yellow if he takes off his shirt to celebrate a goal.

Hassli beat Revs’ keeper Bobby Shuttleworth for his third marker of the young season, then ran to the stands and fired his shirt into the crowd. Maybe he thought it was OK because he had another jersey on. But referee Baldomero Toledo, who was dealing cards as if he was in Vegas, had no choice but to send Hassli off. As the crowd was still roaring in appreciation for the goal, Hassli earned his second red card in as many appearances for the club.

There’s no doubt that Hassli, considering that MLS has issued a mandate to its refs to show more cards and call more penalties, will be a marked man. He’s done it to himself.

Already down to 10 men thanks to a straight red shown to midfielder Gershon Koffie for elbowing Rev Pat Phelan just before halftime, Whitecaps coach Teitur Thordarson decided against packing the back and trying to hang on for a 0-0 draw. He brought in Hassli to join Camilo, the two-goal hero of Saturday’s 3-3 draw with Sporting Kansas City, and Atiba Harris in attack. Even down a man, Thordarson wanted to ramp up the pressure.

Just before the one-hour mark, despite being down a man, the shortanded Whitecaps cut the Revs open. Harris sprung Camilo with a deft pass into the New England penalty area, and the Brazilian went down after bring pushed in the back by Zak Boggs, setting up the bizarre Hassli spot-kick sequence.

But, even up two men, the Revs struggled to impose themselves on the game. And, Toledo wasn’t done yet. In the 74th, the Revs went down to 10 men after A.J. Soares got a straight red for hacking down Harris.

But, as the game went on, the chances started to come.

Chris Tierney was the catalyst; introduced in the 74th minute, Tierney caused all sorts of problems down the left for the Whitecaps. And he nearly equalized in the 82nd minute, but his menacing free kick was just palmed wide by a diving Jay Nolly in the Vancouver goal.

Tierney then crossed to Stolica for what looked like the equalizer, but was ruled out for offside.

But, with the home crowd urging the nine Vancouver men to nurse the game through injury time, Phelan sent a cross into the box that was headed down by Zack Schilawski, and Stolica made no mistake.

It ruined a what should have been a fantastic night for Nolly, who took charge and caught a number of crosses in traffic and made the great save on Tierney. And it soured yet another wonderful performance from Whitecaps’ defender Alain Rochat, who was easily the man of the match for the home team. Rochat shifted to the middle in the absence of injured captain Jay DeMerit, and was calm and collected, even with the Revs up two men. He made some fantastic, daring runs with the ball at his feet. His passing out of the back is excellent.

Through four games, Rochat is not looking like just the best defender on the Whitecaps, but the sort of player who should be compared to the likes of Jamison Olave and Chad Marshall when it comes to the best backs in the league. Period.

The first half saw Revs coach Steve Nicol start with five men strung across midfield. The Whitecaps aren’t even a month into MLS, and already teams are coming in looking to limit Thordarson’s attack. Seven goals in the first two home games will do that.

For large portions of the half, the Revs were able to choke off the pace of the game. A shot by Harris was the only offence mustered by Vancouver early. But, in packing the midfield, the Revs also did little on offence. Their only chance of note was a header from Stephen McCarthy off a Boggs’ corner that Nazir Khalfan cleared away from the Whitecaps’ goal.

And, the Whitecaps, who will be without Koffie and Hassli for Sunday’s date in Houston, will wait on news about midfielder Terry Dunfield, who left the game in the first half with a groin problem.