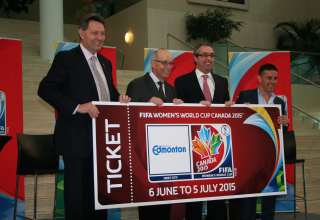 In 2002, Edmonton’s Commonwealth Stadium welcomed more than 45,000 fans for the final of the then-named FIFA U-19 Women’s World Championship. It still stands as the high-water mark for attendance at a women’s youth match.

Eleven years later, and that achievement still resonates with FIFA. On Thursday, the Organizing Committee for the 2015 Women’s World Cup announced that Commonwealth would host the June 6 opening ceremonies and Canada’s first two group-stage matches. Canada’s third Group A match would be played in Montreal.

The third-place game is set for Edmonton. The Alberta capital will host more matches (11) than any other host city.

At a press conference held Thursday at Edmonton’s City Hall, Peter Montopoli, CEO of the tournament Organizing Committee, said that Edmonton’s reputation as a soccer city still resonates in Zurich.

“It’s the history of what has happened here, the 2002 event, the success of having 45,000 for that first (women’s) youth tournament final.”

Of course, Montopoli is aware that Edmonton’s City Council has been hesitant to approve millions in funding for stadium upgrades. But he said that discussions with the city have been positive, and he’s sure that the facility will be ready for the tournament. But he did confirm that neither Commonwealth or BC Place will put in temporary grass surfaces for the tourney.

Edmonton Mayor Stephen Mandel said city council will “do whatever needs to be done to ensure this is a major success for the City of Edmonton.”

With Canada playing its first two games in Edmonton, and Commonwealth getting more games than any other venue, there’s a real sense that the olive branch has been extended — and Edmonton now has proof on why stadium upgrades are worth it in the long run. As well, a May 28 men’s team friendly between Canada and Costa Rica, which Montopoli would not comment on, has been rumoured for Edmonton.

Alberta Minister of Tourism Richard Starke said the announcement proves “Commonwealth is still the best soccer venue in the country, bar none.”

National team coach John Herdman said he has visions of 60,000 fans, all decked in red, packing Commonwealth for the first two Canada matches.

“In 2002, at that special tournament, you saw them as babies. Now, you will see them again as women.”

Herdman has just returned to Canada with the women’s team after a second-place finish at the Cyprus Cup. The coach has rejigged the team, working in a lot of U-17 and U-20 players into the squad, as he feels there is a real talent gap between the thirtysomething generation of Christine Sinclair and Diana Matheson and the youth players. So he needs to take his lumps by playing the kids, hoping they’ll be ready for 2015.

“You don’t win anything with kids, and that’s true. But I am pleased with how things are coming along. But with, this tournament, it will leave a legacy on the development side, so the next national coach who comes in after I leave won’t be in the same position I am in, now.”