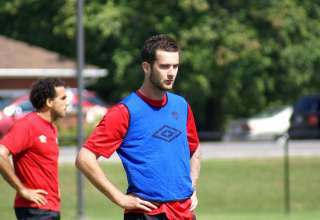 Burnley defender David Edgar confirmed through Twitter that he will be called up for the March 29 friendly between Canada and Belarus scheduled for Antalya, Turkey.

Edgar acknowledged his fans who congratulated him on his call-up.

For Edgar, the call-up sheds a little positive light in what has been a dreary year. He has struggled to find any kind of playing time at Burnley, and a transfer-deadline day move to Swansea was cancelled because of some irregularities in the paperwork — as in, typos.

The Canadian Soccer Association hasn’t announced the match yet, but is expected to in the coming days. The delays have stemmed from getting all the paperwork not only from the Belarusians, but from the third-party host as well.

The CSA is being vigilant, as two previous friendlies held in Antalya were investigated by FIFA, which is now proceeding against charges against the referees involved, including an officiating crew from Hungary which was banned by its own national federation after doing a Feb. 9 game in Antalya without an official sanction.

Referees in the two games were sanctioned by a third-party agent. The CSA and Belarusian officials, when the game is announced, are expected to reassure fans that the game has been booked and managed through the FIFA-mandated channels, not through independent agents.