March 08, 2021
9 New Articles
Home NASL & USL FC Edmonton Eddies thrash Carolina 3-0, but it could have been much, much worse 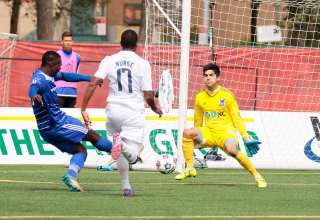 You could make a strong case for Akira Fitzgerald’s inclusion in the NASL Team of the Week.

Without the stellar play of the Carolina keeper, the RailHawks would have lost to FC Edmonton by a more lopsided scoreline than Sunday’s 3-0 result at Clarke Field. Make no mistake; a 3-0 loss was a scoreline that flattered the visitors, who have become all too used to hidings on the Clarke turf.

In the previous four games against the Eddies, the RailHawks surrendered 13 goals. And Carolina could have been on the wrong end of a 6-0 or 7-0 score on Sunday,

Thanks to a combination of generous giveaways and slack defending by the visitors, the Eddies had a three-goal lead at halftime, thanks to goals from Tomi Ameobi, Lance Laing and Dustin Corea, the latter’s first NASL marker. But, consider that Fitzgerald stopped Laing on a breakaway, after the Eddies’ left winger blew around Chris Nurse, Carolina’s tough-as-nails holding midfielder who was shuffled to right back on Sunday. As well, Ritchie Jones had an effort go off the crossbar. Consider that the RailHawks gifted the ball to the Eddies in the final third time and time again through the first half.

“We gave the ball away, and they put it in the net,” observed RailHawks coach Colin Clarke.

The first goal came courtesy of a brutal giveaway by Carolina midfielder Wells Thompson, who was subbed off before the 20-minute mark. Corea picked up the ball and threaded through to Ameobi, who rolled the ball into the corner of the goal.

The second goal came after midfielder Thiago de Freitas broke up a Carolina set piece. The RailHawks were slow to react to the turnover, and de Freitas released Laing with a quick pass. For half the length of the field, Laing and teammate Ritchie Jones had a two-on-one break. Laing opted to keep the ball, cut across the top of the Carolina box, and then placed a shot inside the post.

Another giveaway allowed Corea to get the ball and fire a left-footed shot inside the post, his first for the Eddies.

Despite the 3-0 lead, FCE coach Colin Miller complained that his team “started the game like pensioners.” He felt that the Eddies were giving away the ball too easily.

“If we’re playing a team that’s on top of their game we’re going to get punished.”

Miller felt the team played much better in the second half; ironically, the Eddies didn’t add to their lead in the half in which their play actually improved. But, it wasn’t for want of trying. The Eddies had chance after chance; and, credit to Fitzgerland, even with the points all but lost for his team, he hung in and put on a goalkeeping clinic.

He made a great stop on Daryl Fordyce, then another save on a point-blank chance from Laing. But it didn’t stop there. He made a save-of-the-week candidate stop on Jones, flying to his left to stop a strike. He made another save on Laing, then gathered in a shot from Ameobi, when the FC Edmonton forward had the presence of mind to swing at a loose ball in the penalty area while he was laying flat on his back.

Miller said it was important for his team to be “ruthless,” to not allow the RailHawks any glimmer of hope for a comeback.

The only downer for the Eddies was that, late in the game, Sainey Nyassi had to come off after he stepped on the ball and fell awkwardly on what looked to be clean breakaway on goal.

Now, the Eddies have scored 16 times in their last five games against the RailHawks.

A pizza franchise gives free pies to ticket holders each time the Eddies score three times in a home game. That pizza firm might want RailHawks games to be exempt from this promotion in the future.

The Eddies moved up to second place in the NASL fall table, four points behind the Ottawa Fury, which lost its first game of the fall campaign on Saturday.