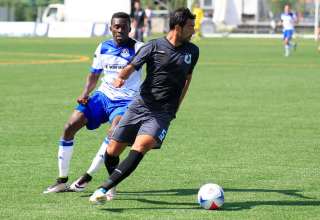 It was the most important six-pointer FC Edmonton has played to date so far this season. If they lost Sunday to Minnesota United, the gap between the Eddies and Minnesota — who hold down fourth spot in the NASL overall standings — would shrink to three points. But, if the Eddies won, they’d tie the Indy Eleven atop the fall standings (with a game in hand) and go nine points clear of Minnesota in the final playoff spot.

Thanks to a great team goal that was finished by Tomi Ameobi, the Eddies passed the test. With the 1-0 win, the Eddies:

• Extended their home winning streak to nine games
• Avenged a loss to Minnesota — as the Loons, in April, were the only team to come to Edmonton and win an NASL match this season
• Are now part of a breakaway pack — that includes Indy and the New York Cosmos — in the NASL overall standings. Two points separate those three teams, then there’s a big gap to fourth-place Minnesota.

This may be the week where the NASL narrative changes. We’re edging towards the halfway point of the fall season, and we might now be talking about FCE, Indy and the Cosmos all being playoff teams, and everyone else fighting for that fourth and final spot — unless one of those other clubs can make a mark on the fall-season race.

“Personally, I don’t look at it in that light, that we’re nine points in,” said Ameobi. “Myself and a lot of the guys take every game as a must-win. That’s the attitude that we need to have from here on out — to play like we need every point that we’re going to get. If we continue to start games and address games with that attitude, we should go a long way.”

After going through the spring season without a goal, Ameobi has scored two consecutive game-winning goals, and has either set up or scored the last five goals the Eddies have scored.

“A lot of thanks have to go my teammates and the manager for continuing to have complete confidence in my ability,” said Ameobi. “Thankfully, the tide has started to turn.”

The goal came right after the halftime kickoff. After the Loons failed to clear their lines, Dustin Corea won the ball at the top of the box and played it out onto the right wing for Shawn Nicklaw, whose high, far-post cross was met by Eddies striker Daryl Fordyce. Ameobi, stretched out and headed it in as he himself lunged into the Minnesota goal.

Ameobi had a couple of more great chances to build the lead, but a breakaway chance was stopped by Minnesota keeper Sammy N’Djock. A headed effort was cleared away from goal by Loons fullback Justin Davis.

Minnesota got two late great chances to equalize; Eddies keeper Matt VanOekel got caught out of his goal, but scrambled back into the penalty area to make a diving effort to knock Ben Speas’s effort away from danger. And, Eddies sub Nicolas DiBiase cleared Ismaila Jome’s headed effort off the line.

Minnesota Coach Carl Craig, who saw his team get just one point from a Puerto Rico-Miami FC series of home games the week before, said his team’s finishing simply isn’t good enough at the moment.

In fact, the first half was marked by some real wastefulness by the visitors, who found lots of space in front of the Eddies’ back four, but really could only muster some mostly harmless long-range hit-and-hopes at VanOekel. There were moments where Eddies fans had their hearts in their throats, though, in a sequence where central defender Albert Watson tackled Speas in the area and then Ibson went down under a challenge from Nicklaw. Referee Juan Marquez signalled that both Minnesota players should get up — and showed a yellow card to Ibson for simulation.