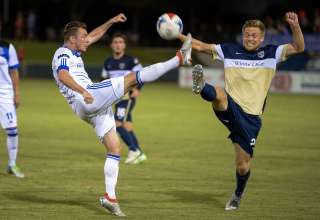 Two years ago, the Eddies opened the spring season at Jacksonville. The Armada’s Jemal Johnson scored just 12 seconds after the kickoff, setting a new league record for fastest marker from the start of an NASL match.

The Eddies open their 2017 NASL season Sunday in Jacksonville, and Miller still thinks about that Johnson goal, and the 3-1 loss the Eddies took on the night.

“We now owe them one,” said Miller after Wednesday’s training session at Clarke Field. “It still eats away at me that we set the NASL record of the quickest goal against in Jacksonville. We’ll try to rectify that result. We’ve done well over the last few times we’ve played down in Jacksonville. They’ve got one or two changes on their team, but we have to go down there with the mindset that we’ll get three points.”

One of those Jacksonville changes is the addition of Canadian Drew Beckie, formerly of the then-named Carolina RailHawks.

Miller said one of the challenges will be adjusting to the Florida heat. The Eddies were training outside in what an Albertan would consider delightful spring weather, around 10 C. But, with the humidity, it could be almost 20 degrees C warmer than that when the two teams face each other in Florida this weekend.

“We’re leaving Edmonton… and at last check it was 88 degrees (F) in Jacksonville with the humidity,” said Miller. “You have to take all these factors; from our point of view, we don’t get that same sort of weather here. So the fitness levels and the attitude of the players cannot be a soft mentality.

“We’re excited about the squad that’s traveling down to Jacksonville, we’ll take an extra couple of players because we’ll train down there,” said Miller. “It’s a difficult fixture, it’s very nice of the NASL, rather than playing us in San Francisco, they decide to fly us down to Florida for the first game. But that’s OK, we’ve done it before.”

FCE captain Nik Ledgerwood says the team needs to “pick things up where we left off last season.” The team enjoyed its best-ever NASL campaign in 2016, and got to the semifinals.

“The mentality hasn’t changed,” said Ledgerwood. “We’re still going to be tough to score on. But I think we’ve brought in some offensive flair as well. I think we want to make more an offensive game, especially at home, we want to push for more games where we’re not just waiting for the last 10 minutes to grab that 1-0 goal.”

A lot will fall on new signing Dean Shiels, the Arsenal youth product and Northern Irish international is the “game-changing” signing that Miller had promised.

Defender Karsten Smith was on the sidelines doing fitness drills, but isn’t healthy enough to travel. Midfielders Dustin Corea and Sainey Nyassi, who were doubts earlier in the week, are both now fit to travel.

It’s an odd situation for the Eddies (and the Armada). They were both off last week, when the rest of the NASL got going. So, Miller used the time to take in action from around the league.

“It once again reinforces that this league is one of the best,” he said. “It’s so competitive from top to bottom. There are no gimmes in this league, which is fantastic. I watched two out of the three games this weekend, and I was very impressed.”