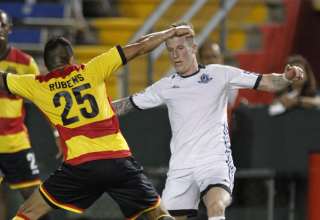 In his NASL coaching debut, Colin Miller had to settle for a draw.

David Foley’s laser beam of a shot allowed the host Fort Lauderdale Strikers to salvage a 1-1 with FC Edmonton in their NASL season opener.

And FCE coach Miller can only wonder what if — as a first-half strike from Neil Hlavaty and a late attempt from Shaun Saiko both found the woodwork.

Miller started a FCE lineup that featured only three players who were Eddies in 2012: Keeper Lance Parker, midfielder Saiko and Antonio Rago, moved up from fullback to the midfield for the beginning of the new season. It was a mix of old and new who combined for the goal. In the first half, Saiko floated a ball into the Strikers’ penalty area. There were three Eddies who made runs that caught the Strikers’ backline flatfooted. But it was Knight — the former Whitecap who spent last season in San Antonio — who got his head to the ball, giving Strikers’ keeper Matt Glaeser no chance.

Knight said the Eddies had been working on finishing Saiko’s crosses in preseason.

“It was a standard Saiko delivery, he stuck it right into the six,” said Knight. “I was moving off the shoulder of the defender and all I had to do was put a perfectly placed ball into the net.”

It was a just reward for the Eddies, who came out pressing the Strikers early, giving the home team’s defenders and midfielders very little time on the ball. Hlavaty sounded the alarm with a strike from distance that caught Glaeser flatfooted and struck the post.

The Eddies began the second half on the front foot, but the Strikers clawed their way back into the game. By the 60th minute, the Strikers had more of the ball and looked more threatening going forward.

Miller brought off Knight for Massimo Mirabelli, trying to keep fresh legs in the Florida heat. Edem Mortotsi also made his FCE debut later in the half.

In the 73rd minute, Foley cut in from the left side, and the defensive line backed off, daring the former Puerto Rico Islander to shoot. He did just that, sending a 20-yard rocket into the top corner of the goal.

“When you give a player with the quality of Foley the time to shift the ball to his preferred right foot, you are going to get punished,” said Knight.

While Foley’s goal was spectacular, it didn’t come out of the blue. After veteran midfielder Walter Restrepo was brought into the game by Strikers’ coach Daryl Shore, the home team found another gear. There were penalty shouts. Lance Laing, who was an NASL Best XI left back when he was a Striker, made a key block to stop a scoring chance. And Parker touched a shot onto the bar.

Knight said the amount of time the Eddies spent chasing the Strikers, who had a lot of the ball even early in the game, took its toll. Knight, who analyzes the game like a playing coach, said the Eddies need to work on bringing a striker back to fill the gap in midfield or bring in a third player to help the two players in the middle of the park.

“Even if you are just making small lateral movements, it does add up in the end. We need to learn to relax and gain control of ourselves, and be able to move the ball so we aren’t always defending.”

But, before the goal, a decision was made that could have changed the game. Early in the second half, with FCE still holding a 1-0 lead, striker Daryl Fordyce stripped the ball from Strikers central defender and had a clear look at goal. Thomas brought him down from behind, and was given a yellow, not a red, for the foul. Saiko place the ensuing free kick just wide of Glaeser’s right post.

Miller said he didn’t have a clear view of the incident and couldn’t comment on the call. But he did have a lot of praise for Saiko, who he thought had “some spectacular touches of the ball.”

And, even though the Eddies gave up the equalizer, Miller sees the bigger picture. All of the other NASL games finished 0-0 tonight (and Paul Hamilton got sent off in his Carolina RailHawks debut, which means he won’t play against his old club when the Eddies go to Cary, N.C. next week), so the Eddies and Strikers are even at the top of the table.

“If there was one area I was disappointed in, it was our passing,” said Miller. “I didn’t think we passed the ball well, and we gave the ball away too easily at times. But in terms of effort, I was very pleased. The players competed. We gave a 19-year-old (Mortotsi) his debut tonight. Coming down to Florida and playing here is not easy. So I am pleased with the point.”
MATCH HIGHLIGHTS