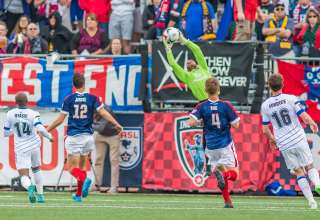 According to the NASL’s match stats, FC Edmonton got just one shot on target in Saturday’s match at the Indy Eleven.

But, that solitary shot went in. Jake Keegan’s looping header found the back of the goal, allowing the Eddies to get a 1-1 draw with the Eleven. The Eddies finished their two-game road trip with a decent four-point haul.

The Eddies are four points back of co-NASL spring season leaders, the New York Cosmos and the Carolina RailHawks. The Eddies still have home games with the RailHawks and Cosmos to come in the spring season.

It didn’t start off well for the Eddies on Saturday. Indy Eleven central defender (and former Whitecap) Greg Janicki gave the home side the lead in the 21st minute. A free kick from Nicki Paterson (former Ottawa Fury) skipped into FC Edmonton’s penalty area, and Janicki got a leg to it. It was an example of something we see so often; a poorly taken free kick, because it bounces awkwardly, gives the defending team lots of problems.

That marked the first goal that the Eddies had surrendered since an April 16 loss on the road to the Tampa Bay Rowdies.

“It was a sloppy, scrappy goal to give up by our standards,” said FC Edmonton coach Colin Miller. “It wasn’t a good goal by any stretch of the imagination.”

Just two minutes later, Indy Eleven forward Justin Braun (former Toronto FC) pounced on a poor goal-kick effort from Matt VanOekel. Braun dashed onto the keeper’s errant pass and broke in all alone on goal; but Van Oekel saved himself from embarrassment by coming well out of the goal and smothering the shot.

In the 36th minute, the Eddies drew level. Sainey Nyassi, who missed Wednesday’s win over Jacksonville because of an appointment with U.S. immigration, was back in his starting role on the right wing. He floated a ball into Indy’s penalty area that split two defenders and found striker Keegan, who looped a headed ball over the head of helpless Indy keeper John Busch. For Keegan, it was his second goal this season.

“We talked about finding a gap between the centre backs,” said Miller. “And, lo and behold, that’s what Jake goes and does. And Sainey drops a glorious ball in there. As we’ve gone along. we’ve seen Jake become a real threat.”

The second half was a war of attrition — this was not the kind of game that would be called a classic. While the Eddies got one shot on (and past Busch), the Eleven got only three total shots on goal. The Eddies did cause some panic in the Indy penalty area late in the match, but couldn’t get the telling shot on target.

“It was a good result,” said Miller. “This is not an easy place to play in, this is not an easy surface to play on. We only had a couple of subs on Wednesday and then we come here and I thought, for a lot of the game, we were the better team. We’re pleased to get four points out of this trip, disappointed it wasn’t six. But if the players continue to produce these kind of efforts, we will be seeing positive results.”

Dustin Corea, who was also out Wednesday, rejoined Nyassi in the starting XI.

Shamit Shome, who played 90 against Jacksonville, was unavailable — he had to write a math exam at the University of Alberta on Friday.

“He’s one of the clever ones,” joked Miller. “I offered to help him with his exam, maybe hold his jacket.”

Midfielder Cristian Raudales was out after suffering a calf injury Wednesday. He’s in a walking boot and Miller said he doesn’t expect Raudales to start running in the next four weeks.