September 24, 2022
9 New Articles
Home NASL & USL FC Edmonton Eddies give up three for the first time this NASL season; locked in as NASL’s No. 3 seed 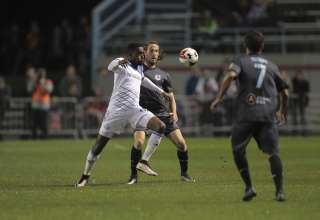 FC Edmonton surrendered three goals in a game for the first time in NASL play this season, and the team’s hopes of hosting a first-round playoff match evaporated.

After taking a 1-0 lead Saturday night thanks to a howler from Minnesota United keeper Sammy N’djock, the Eddies surrendered three unanswered goals to the Loons. The 3-1 loss, coupled with New York’s win over Jacksonville, ensures the Cosmos will win the fall season title. The loss assures that the Eddies will enter the NASL playoffs as the No. 3 seed and will visit Indy in the NASL semifinals.

But, with two regular-season games left, the Eddies won’t be treating the remainder of the schedule as lame-duck matches.

For the second straight game, NASL goals-against-average leader Matt VanOekel was on the bench, with Tyson Farago starting in goal for the Eddies. Miller said he was told that if VanOekel played, there was a “30 per cent” chance he’d reinjure a bad hamstring, and the coach didn’t want to take that chance. Farago surrendered two goals to Christian Ramirez and a headed goal from Stefano Pinho. To be honest, Farago didn’t get a lot of help from the players in front of him.

But things did start off brightly for the Eddies; in the 16th minute, Daryl Fordyce’s free kick was hit right into N’djock, but the keeper spilled the ball, leaving Albert Watson an easy chance to put home the rebound.

The Eddies, though, weren’t able to hold off a Minnesota team looking to hold onto fourth place in the overall standings — and the ability to control its own destiny in the hunt for the final playoff spot. Just seven minutes after Watson gave the Eddies the lead, Ramirez cut through the middle of the Eddies’ defence after a wonderful flicked-on pass from JC Banks. Ramirez, the NASL’s leading scorer, ripped the ball into the top of the goal.

The Loons looked poised to take the lead before halftime; the home side was ready to sweep a ball into an open goal after a scramble in the box, but the offside flag saved the Eddies.

Ramirez then flicked the ball at goal that forced Farago into a good save. Banks was poised to put the rebound in an open goal, but a challenge from Watson got the ball to safety.

The Eddies continued to flirt with danger in the second half, and were made to pay. Kevin Venegas played a perfectly weighted ball into Edmonton’s penalty area; Ibson knocked it down and squared it for Ramirez, who beat Watson to the ball and bundled the ball into the goal.

Pinho added the insurance goal when he beat Eddies centre back Pape Diakite to a cross.

Diakite, thanks to yellow-card accumulation, will miss next weekend’s game. As well, fullback Shawn Nicklaw is one yellow card away from suspension, and Miller said that might influence his lineup decisions heading into the playoffs.

“If we keep defending like that, we’ll get what we deserve,” said Miller. “But we were playing our third game in seven days, Minnesota had a week off. It’s a combination of tired legs, poor defending and lack of discipline. But take nothing away from Minnesota; it’s a good team and they are battling for that fourth position.”