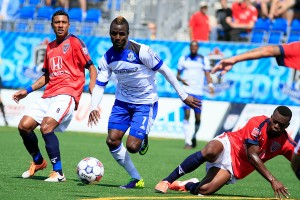 For the second week in a row, FC Edmonton faced a team that had yet to keep a clean sheet in either the NASL spring or fall seasons.

For the second week in a row, the Eddies obliged and gave the opposition its first shutout of the campaign.

Last week, it was Atlanta. On Sunday, on the first game on the pristine Clarke Stadium pitch, it was the Indy Eleven. The Eddies suffered their second 1-0 loss in a row.

And sure, the highlight shows and recaps will show the comedy of errors that led to Kleberson’s injury-time game winner. But, really, Kleberson’s 92nd-minute effort should have been a consolation goal — that’s how badly the Eleven was out chanced by the Eddies. You could argue that the Eddies created as many chances as they did in the spring season finale, when they found the net six times against Carolina.

But, as Eddies coach Colin Miller put it at halftime, the way the Eddies attackers find ways to turn chances in front of goals into shot attempts that didn’t even trouble the keeper is a “physical impossibility.”

Interestingly, the longer the game went scoreless, Miller used all three of his available subs — and none of them were striker Frank Jonke, who was dropped from the starting XI this week.

“We had a team that was dead and buried,” said Miller. “We could have had five or six goals at halftime.

“We have to be better in front of goal. We find ways to hit the goalposts, the crossbar or the photographers at the side of the pitch.”

And, after letting Indy off the hook time and time again, the Eddies took the suckerpunch to the kisser right at the death. After Lance Laing failed to clear the area, a cross was lofted in and hit defender Edson Edward in the back, as he was falling. With the ball at his prone body, he decided to try and head the ball — while lying down — to clear it away. Instead, the ball rolled off his head to the middle of the penalty area, where Kleberson obliged by putting the winner into the corner of the goal.

Indy started the game brightly. On two occasions Blake Smith, on loan to the Eleven from the Montreal Impact, found space on the right side and got shots away on goal. But both times, FCE keeper John Smits was equal to the task, coming off his line and taking the space away.

For most of the half, though, FCE thoroughly dominated, making attack after attack on the right wing, exposing Indy Eleven left back Jaime Frias as the weak link in the defence. Unopposed crosses rained in from Edmonton’s right/Indy’s left.

James was able to take a pass from Milton Blanco and then turned around Kleberson as if the Brazilian was wearing cement shoes; he pushed a ball behind the Indy defence for Laing, who chipped keeper Kristian Nicht and watched his effort go off the bar. Then, FCE central defender Beto Navarro, who joined the attack, won a ball on the right side (again), laid off a pass at the top of the box for Fordyce, whose effort went off the bar.

That was all in the first 20 minutes.

But, in the 28th came the most egregious miss of all. Blanco pounced on a giveaway and fed the ball to James on the right wing (again), who then laid a roller into the area for Cristian Raudales to side foot home. The ball was shanked well wide.

In the second half, James totally missed making any contact with a decent cross from Edward; Tomi Ameobi, who came on as a sub, got the ball behind the defence but had his effort stopped by Nicht, who came well out of goal.

Finally, Michael Nonni, another sub, rifled a shot that Nicht touched onto the bar.

At least with Ameobi and Nonni, they could say they forced Nicht into making the saves. But, too often this fall season, great chances aren’t put anywhere close to the target. And that’s why the Eddies have yet to score in three fall season games, and are already 11 points back of the table-topping San Antonio Scorpions.

Maybe the enduring image from the game should be a second-half shot from Laing, which was blasted well wide and over the goal, and flew over the fence at the end of the stadium and into the parking lot. It might do more to summarize the game in one play than the Kleberson goal.