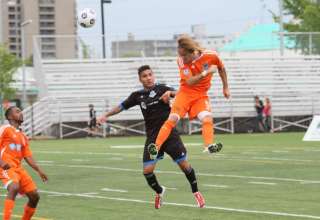 The Carolina RailHawks really only had one outstanding scoring chance in Sunday’s match with FC Edmonton; but that was enough to eliminate the Eddies from the NASL spring-season race.

A 1-1 draw eliminated the Eddies from having any chance of finishing atop the NASL standings, with two games left to go in the spring season. And the draw kept the Atlanta Silverbacks in pole position, with the RailHawks a point back.

A late goal from Cesar Elizondo allowed the RailHawks to snatch the point — and the goal also saved Canadian central defender Paul Hamilton some blushes. Hamilton, the NASL Best XI defender who was cut by the Eddies earlier this year and was making his first return to Alberta, was victimized by FCE striker Michael Cox for the game’s opening goal.

After 70 minutes of defensively tight football — in which neither team caused the opposition keepers any real trouble — Cox conjured up a wonder goal. Shaun Saiko, who had just come in as a sub for Massimo Mirabelli, slipped Cox a pass down the left channel. Cox was able to get the ball in front of Hamilton, then pushed the ball past his fellow Calgarian and former teammate before lofting a shot over keeper Akira Fitzgerald and into the goal.

“I was able to make the turn, Shaun Saiko made a good pass, and I was able to get a bit of a nutmeg in there,” said Cox.

And, as the clock wound down, it looked as if that goal would stand. Carolina’s attacks were consistently thwarted by a staunch Eddies’ back line, with veterans Albert Watson and David Proctor continually winning first ball after first ball. The Eddies were organized, and keeper John Smits, starting in place of the injured Lance Parker, had very little to do.

In fact, Elizondo’s goal could be attributed to maybe too much effort from the Eddies. Ty Shipalane, the midfield speedster who has caused nightmares for FCE over the past two and a half seasons, got the ball at the top of the area. Four defenders collapsed to the middle to try and take away the shooting angle. They did just that, but the shot spun away to the left side of the area, where Elizondo had been left unmarked, because every black shirt in the box had moved to clog up the middle. Elizondo’s low shot from inside the post sent FCE’s spring season into prep-for-fall-season mode.

“We are going to have to get some breaks, sometime,” said coach Colin Miller after the match. “Football doesn’t care about you. Really, I couldn’t ask any more from the players. I only counted two chances for them.”

Officially, the RailHawks only had one shot on goal — but it was all that mattered.

As well, at the end of the game, Eddies central midfielder Robert Garrett, who ran miles to help the backline, had to be carried off the field, favouring his left foot. He was on crutches after the game.

But there was one bright spot for FCE outside of the Cox goal — and that was 16-year-old Hanson Boakai. The Canadian U-17 national team star made his pro debut when he came in as second-half sub. With U-17 coach Sean Fleming in attendance, Boakai became the youngest player to see the field in NASL history, and that includes the original incarnation of the league, too. Ironically, before this season, the record for youngest player in NASL was held by current FCE coach Colin Miller, who played as a 17-year-old in the league.

But his mark was first broken by Sadi Jalali, who had made several sub appearances before making his first FCE start Sunday, and now by Boakai.

Boakai admitted that when Miller told him he was going in, “I almost lost my mind.”

“It was a special moment for me, being the youngest player to play in NASL. This is not an easy league.”