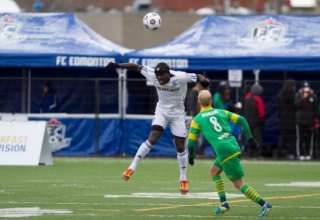 FCE’s Lance Laing, in white, heads the ball away from Rowdie Luke Mulholland.

The Tampa Bay Rowdies looked like they were out of their element. FC Edmonton looked as if it was just fine with the elements.

The Eddies beat the Rowdies at Clarke Stadium Sunday. And the 2-1 scoreline wasn’t fair to the home side, which really should have turned this into a rout by halftime. With the wintry conditions favouring the home side, the Rowdies were never truly in this game.

Crews worked to clear the snow off the artificial pitch in the morning but, by 2 p.m. kickoff, there were patches of ice that could clearly bee seen on the surface. According to Environment Canada’s Weather Office, the temperature at kickoff was -2C, but it felt like -8C with the wind chill. With members of the Canadian national women’s team in attendance ahead of their game Wednesday against South Korea, Clarke Stadium offered a home-field advantage that needed the words “frozen tundra” to do it justice. For the final home game of the season, FCE finally did have a distinct advantage over the opposition.

Had the Eddies not seen so many of their golden goal-scoring opportunities go astray, this one could have been 5-1, 6-1 or 7-1. In the three years FCE has played in NASL, there has been few games where the Eddies have been as dominant over the opposition.

“All in all, it was a fantastic performance,” said FCE coach Colin Miller. “I’m delighted for the fans who turned out today.”

The Eddies’ coaching staff spent hours upon hours breaking down the Rowdies, and they decided to give left back Lance Laing, voted the supporters’ player of the year, and right back Edson Edward the license to get up and down the park. The Eddies felt that the Rowdies prefer to defend narrowly, and that there would be room on the wings.

The ensuing mismatch between Rowdies’ left back Raphael Cox and Edward set the tone for the afternoon. With midfielder Robert Garrett riding shotgun down the right side, the Eddies launched attack after attack down that wing.

The first chance came off the left side. Rowdies right back Frankie Sanfilippo let up on a ball he thought was going into touch. FCE’s Corey Hertzog steamed in, saved the ball and then stormed around Sanfilippo. Hertzog squared the ball to Garrett, who looked to have an open goal. But Sanfilippo, out to atone for his mistake, hustled back just in time to clear the ball off the line.

Then, Edward beat Cox on the right side, cut to the middle, then slammed a shot off the post. The rebound came to Corey Hertzog, but Rowdies keeper Diego Restrepo lunged across his goal line to stop the second chance.

At that point, the home fans had to wonder if the league’s lowest scoring team would be snakebit yet again.

But, in the 34th, the Eddies got their deserved lead. And again it was Edward, voted the man of the match, who got it going. Cox lunged in to try and take the ball away from Edward, but instead the ball went right to the feet of the FCE right back. He struck a good shot towards goal, which Restrepo parried away. Daryl Fordyce picked up the rebound at the side of the net, and rolled it across the face of goal. The ball hit the inside of the far post, and with the sidespin, it took a right turn and darted across the line.

“From that angle, I didn’t think Daryl’s shot was going to go in,” said Edward. “But the soccer gods were with us.”

Two minutes later, the Eddies doubled their lead. Garrett was left unmarked and unchallenged at the top of the area, and his 25-foot drive was too powerful for Restrepo to parry away. The keeper got his fingers to the ball, but couldn’t help it from hitting the back of the net.

But, as strong as the Eddies were in the first half, the cynic had to wonder if they’d tossed away too many chances. And those fears were heightened when the Rowdies found the back of the net with their first shot on target. It came two minutes after the half. A 35-yard free kick from Luke Mulholland found the corner of the goal.

Mulholland didn’t hit it with great power, but it looked as if keeper John Smits — called in at the last second to replace Lance Parker, who picked up an injury in the warm-up — was slow to get over to the ball. Tampa Bay’s Lucky Mkosana jumped over the ball as it came through the crowd of players, and that served to distract the keeper.

Smits did make up for the goal five minutes later, when he stopped Mulholland from close range after Hertzog’s attempt to clear the ball out of the area fell right to the feet of the Rowdies’ forward.

But, after that chance, Tampa didn’t threaten again. But Edmonton could have, and maybe should have, piled on the goals.

Teenager Sadi Jalali missed a golden chance to score in front of his hometown fans, but put his point-blank chance over the bar. Then, Chris Nurse, set up by a pass from Edward after the right back had taken Cox to the cleaners for umpteenth time, had his low drive well saved by Restrepo.

Neil Hlavaty had a free kick skip off the crossbar, and then local product Edem Mortotsi, who came on as a late sub, slammed an attempt off the post.

Miller was ecstatic that the team performed as it did in the final home game of the NASL season.

“The attitude of the players from the start of the game was fantastic.”

The weather did play a part, as the Rowdies’ defenders didn’t hit the deck to try and take the ball away from the Eddies. The wet, icy field was slick, and that favours the attackers over the defenders. The defenders have to turn when the attackers run at them and, if footing is an issue, it’s hard to keep up.

Should the Eddies hope for more wintry home dates in the future? Well, even though almost 4,000 tickets were out for the match, it would be a stretch to say that much more than a quarter of them were actually used. And, even a born-and-bred Canadian like Edward joked that, at the end of the game, he couldn’t feel his finger or toes.

But, with the New York Cosmos having wrapped up the season, the winter weather added to the theatre of it all, didn’t it?