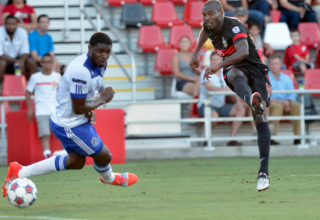 FC Edmonton did enough to win its first road game of the NASL season. Despite fielding a skeleton crew thanks to an injury crisis, the Eddies were still able to create scoring chances and got goals from Michael Nonni and Cristian Raudales.

But, the X factor in the game was Billy Forbes. On a night when his team didn’t defend well and gave the ball away too easily in midfield, the San Antonio Scorpions’ winger was a one-man dynamo, creating two goals and causing problems for the Eddies all night long.

In the end, a 2-2 result on the road has got to be seen as a valuable point for FCE. That point could come in handy come November. But, make no mistake, Wednesday’s match could be the best road game the Eddies have played all season.

The Eddies remain undefeated in the fall campaign, with five points from three games. But, starting the season with three road games (the Tampa date is still to come) after a “home” opener in Fort McMurray, the Eddies knew that July was going to be a challenging month. Injuries or call-ups that have kept seven regulars out of the lineup have made it worse. Really, a win and two draws is pretty darn good considering the nightmare injury scenario coach Colin Miller has to deal with.

If the Eddies can get something out of this weekend’s road date in Tampa — well, the silk purse will have been made out of the sow’s ear.

“I’m absolutely delighted,” said Miller after the game. “This stadium is one of the most difficult places to come in the league. They have so many quality players here [in San Antonio]. But the credit has to go to our guys, they just never gave up.”

San Antonio got off to a great start; less than 20 minutes in, Forbes rode a robust challenge from defender Kareem Moses at the top of the box, then laid the ball off for Omar Cummings, the NASL’s top scorer. In the 4-0 loss to the Eddies in Fort McMurray two weekends ago, keeper Matt VanOekel stoned Cummings on a couple of clear-cut chances. This time, on the Texas pitch, Cummings made no mistake, rolling the ball into the corner.

But, the Eddies soon drew level — and the Scorpions two Canadian defenders were caught flat-footed. Adrian Cann and Nana Attakora allowed Michael Nonni to make a late run into the box and finish a nice cross from Johann Smith.

(Yes, three of the four men mentioned in the preceding paragraph are former TFC players).

Miller said that he thought Smith played his best game as an Eddie.

VanOekel made a huge save before halftime, stopping Tyler Gibson from point-blank range after Forbes had laid off another killer pass after a blazing run.

Forbes wasn’t done. In the second half, he blew down the left side, then dashed around Eddies’ centre back Albert Watson in the penalty area. He then cut back a perfect pass to the far post, where Cesar Elizondo was waiting to place the ball into the goal.

“He’s one of the best players in the league,” Miller said of Forbes. “When he is creating quality build-ups, quality chances, it’s not a surprise.” But Miller noted that both of the San Antonio goals were created because Forbes pounced on “soft giveaways” from the visiting team.

“I’m biased, but I felt both of those goals, really, were against the run of play,” said Miller.

But, after that, the Eddies took over the game, dominating play in the middle of the park. Thiago made some deft runs and was unafraid to take San Antonio defenders on one-on-one. And Cristian Raudales was enjoying one of his best-ever games as an Eddie, spraying some decent passes around the park.

And Raudales then took the initative, blasting a shot from outside of the box that found the corner of the San Antonio goal.

“He does that in practice all the time. Thiago, too, he can hit them from distance. It’s not just Laingy [Lance Laing] who can hit the ball like that for us.”

From then on, it looked like the Eddies were the only team that would be able to get the winner — they just couldn’t convert their final few chances.

San Antonio keeper Daryl Sattler was forced into a diving save of another Raudales drive. And, with time running out, Raudales’s looping header went over the bar.

The Sattler save might have annoyed Miller; at halftime, in his TV interview, he blasted NASL for only handing Sattler a one-game suspension after the keeper saw red for blasting the ball in frustration at Eddie Lance Laing two matches ago. Miller said he wanted to “protect my players;” that there’s no way Sattler should have been back in the lineup for Wednesday’s match against the Eddies.

“I told the big man to his face after the game that I didn’t think he should be in the park,” Miller said, saying that Sattler was sent off for violent conduct — and that one-game suspension wasn’t appropriate for violent conduct.