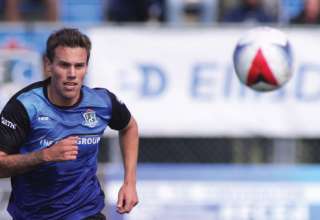 The good: For the fourth straight NASL fall season match, FC Edmonton wasn’t shut out. That’s a good trend for the lowest scoring team in the league in the spring season.

The bad: Some themes we’ve seen over and over again this FCE season played out once again Sunday at Clarke Stadium, as the Eddies had to settle for a 1-1 home draw with Puerto Rico FC. The Eddies, who have kept just one clean sheet all season, gave up a goal that will make the defenders cringe when they see the video. And, in the second half, the Eddies had a series of point-blank chances that ended up going anywhere but across the goal line. In yet another game, the Eddies didn’t take full advantage of their numerous chances.

“Another day, we win 2-1 or 3-1, but we have to take the positives out of this, and keep getting to the good places,” said Eddies midfielder Ben Fisk, whose goal gave the home side the lead just before the stroke of halftime.

Puerto Rico FC coach Marco Velez made just one change to his team’s lineup, despite having played Wednesday in Jacksonville. The Eddies hadn’t played since two Fridays ago.

Chances were at a premium in the first half, but the Eddies broke the deadlock thanks to some inspired interplay between Tomi Ameobi and Fisk. Ameobi, out on the left side,  kept the ball from going into touch, barely, and then spun and blew past defender Phanuel Kavita. He then squared the ball from Fisk, who placed a shot with enough power that it still went in, even though PRFC keeper Trevor Spangenberg got a hand to it.

“I busted a gut to get there,” Fisk said.

But, Puerto Rico tied the game early in the second half; Conor Doyle was left wide open in the penalty area to head home. It was all too easy for the PRFC forward.

“We gave the ball away and nobody picked up,” admitted FCE coach Colin Miller. “We were Santa Claus again.”

And, then, cue the Eddies’ second-half chances to win the game;

And, just before the game came to a close, FCE captain Nik Ledgerwood picked up his second yellow after a clash of heads with Doyle. And, PRFC forward Giuseppe Gentile left the game on a stretcher after a challenge from Mauro Eustaquio that referee Carol Anne Chenard deemed worthy of a yellow card.

Ledgerwood will miss next Saturday’s match at San Francisco due to the mandatory suspension and then will be out for Sept. 2 at North Carolina FC for national team duty.

Miller said he was disappointed that the Eddies once again had to settle for a draw despite scoring first.