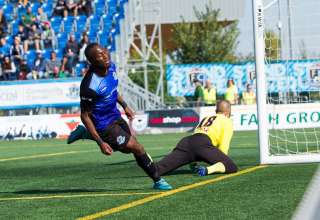 This was supposed to be the start of the Eddies’ week from hell. At home Sunday to Indy, then on the road Wednesday at Puerto Rico and then Saturday in San Francisco. Six games in three days, with over 11,400 km of travel.

But, after the Eddies dominated Indy and won 2-0 at Clarke Stadium, Sunday, they found out they wouldn’t be getting on the plane on Monday. The league announced that the game at Puerto Rico has been postponed. Forecasts are calling for Hurricane Maria to arrive at Puerto Rico Wednesday. Because the Eddies were scheduled to leave first thing Monday morning, a will-they-or-won’t-they decision had to be made well before Wednesday’s scheduled match.

But, FCE coach Colin Miller didn’t know before the Indy game that the Puerto Rico match was off; so he toyed with his lineup, thinking he was going to need to stretch his squad for three games in six days.

“That’s how far along the line we are thinking, and that’s regardless of how well we play on Sunday,” said the coach before the match. “We will definitely makes changes for Wednesday night and then we’ll think about the San Francisco game after the Wednesday game.”

So, on Sunday, Sainey Nyassi returned to the starting lineup on the wing, while Nik Ledgerwood was moved from midfield to right back. Of course, fullback is where Ledgerwood often plays with the Canadian national side, so it wasn’t like he was being thrown into uncharted waters.

Ledgerwood came up with maybe his best performance of the season, and Nyassi terrorized the Eleven down the right wing. So, the changes paid off.

“I don’t often single out individual players, but I thought Ledgerwood was our man of the match,” Miller said after the game. “His use of the ball was excellent.”

Going into the wind in the first half, and just seconds after Eleven striker Eamon Zayed blasted high from five feet in front of the Edmonton goal, Ledgerwood floated in a ball over Indy fullback Nemanja Vukovic. Nyassi knocked it down with one touch, then dashed by defender Cory Miller before slamming a shot inside the far post.

Nyassi could have had a second a couple of minutes later, but his effort was cleared off the line by Indy defender Colin Falvey.

In the second half, with the wind at their backs, the Eddies unleashed keeper Tyson Farago. By now, you’d think the book on Farago’s right leg would have been distributed to every coach in the league. But his 70-plus yard bombs repeatedly got over the Indy backline, where Nyassi or Eddies striker Tomi Ameobi got on the end of them.

Finally, a Farago blast led to an Eddies goal. A long boot got over the head of Falvey, and Ameobi got in the Indy area. Ameobi slid the ball to teammate Ben Fisk right on the penalty spot; Indy’s Cory Miller came in late with a sliding challenge and a spot-kick was awarded without any argument from the Indy side.

Substitute Dustin Corea calmly chipped in from the spot to double the Eddies lead.

But, the Eddies can enjoy the victory rather than heading to their homes and getting the sleep needed ahead of an early-morning flight. The Monday travel day is off – and now we’re all once again wishing Puerto Rico well in the face of a hurricane.