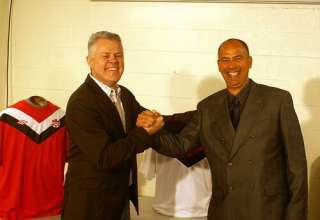 The game against the South American nation will be Canada’s third friendly of the year, having dropped a 1-0 decision in Greece in February followed by a 1-0 win over Belarus in Turkey last month. The win in March helped Canada climb nine spots in the FIFA world rankings, going from no. 84 to 75 while also moving up to seventh in the CONCACAF rankings.

The game will be the national team’s last tune-up game before they kick off the Gold Cup on June 7 with a match at Ford Field in Detroit against the host U.S.

Hart mentioned in the press conference that Ecuador was not the only country willing to play a friendly in Canada, but simply was the ideal opponent.

“We had European countries that were willing to come and play but we felt Ecuador, their style, their athleticism sort of matched the teams we will be playing at the Gold Cup,” said Hart.

“They’re on a high, building their program back up again and we thought it would be a very good preparation game for us. A lot of players on Ecuador will be wanting to prove themselves to their new coach. And for us, it will give us the sort of game that you need going into a competitive tournament.”

In advance of the Gold Cup, Hart has had the opportunity to scout other CONCACAF teams, but for him Panama is the one that stands out. Canada will play the U.S., Panama and Guadeloupe in Group C of the tournament.

“Out of the teams I’ve seen, the most impressive has been Panama,” said Hart. “They’re very consistent and they’ve been playing a dynamic kind of game, very athletic and they were the team that were impressive.

Although they’re not in the same group, Hart is weary of Jamaica as well.

“Of course Jamaica, which is one of the strongest Caribbean teams, we’ve played them a number of times so we know what to expect from them. Those two teams were not surprising but for me two teams to watch.”

One of the biggest challenges for Hart as a coach for Canada is recruiting the nation’s best players for the National team. He was recently faced with that situation in the uncapped David (Junior) Hoilett. Hoilett has impressed many observers in his time at the club Blackburn Rovers in the Barclays Premier League. The striker is eligible to play internationally for England, Jamaica and Canada, but has yet to make a decision.

“In terms of bringing on players you pick a squad, you know the players you want and you invite the players in,” said Hart in his role of selecting players for the national team roster.

“Now if the player has not been officially capped for Canada, it’s his decision to make that decision on if he wants to join the squad or not. I can only open the door and show them where they fit in the program, the importance of the program to the country, etc but in the end it’s their decision.”

Apparently Hoilett needs to sort out his contract situation since he’s playing on a small contract at the moment.

“I don’t want to discuss the situation with David anymore,” said Hart. “He knows he’s wanted and I did have an opportunity to meet with him. The door is open and it’s his decision.”

Over the past year, Hart hasn’t always been able to trot out his best lineup but has had the opportunity to a look at a lot of different players. However, Hart points out, playing exhibition matches is not as ideal to evaluate his roster in comparison to real competition – the Gold Cup will be the perfect testing ground.

“I look at the Gold Cup competition coming up and I say to myself, ‘I’ve seen a lot of players that have impressed’. The squad at times has looked very, very smooth in the progression of every game, but I haven’t seen them in competition and that’s the big thing,” said Hart.

“When it really matters, you got to come and fight for the results. That’s what does matter. It’s only been exhibition games and the Gold Cup is one of those platforms for us.”

Although the Gold Cup is important competition for Hart, he feels qualifying for the World Cup is the primary goal for the Canadian Soccer Association.

“The World Cup qualification is everything to us. That’s what we want. I’m not saying that we’re not going to the tournament to do well, of course we go to the tournament and you want to win. That’s the objective of the game but a lot still has to be determined.”
The Canadian Soccer Association also announced ticket details on Thursday for the June 1 match, with tickets starting as low as $20 (taxes included) to as high as $75 for Club seats.

The June 1 match against Ecuador will be broadcast live at 7pm (ET)/4 pm (PT) across the Rogers Sportsnet East, Ontario, West and Pacific channels.