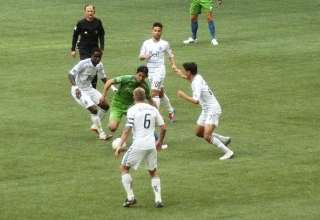 They should have killed the game off sooner.

Leading 2-1 with only three minutes of stoppage time standing between a victory against the Seattle Sounders, the Vancouver Whitecaps conceded a 90th-minute goal to Fredy Montero.

And while the defense got its fair share of scrutiny in post-match comments for the 2-2 draw, it was the misfiring Vancouver attacking group which came under focus.

“It was a bittersweet game,” captain Jay DeMerit said. “You still get a point. That’s positive. It’s better than losing. But, when you lose – tie – a game like that, it hurts a little bit more.”

DeMerit’s slip, saying “lose” rather than “tie,” said it all, as the conclusion must have felt like a loss for the team given the tying goal’s proximity to the final whistle.

“We could have had an excellent result, so there’s very little satisfaction.”

Darren Mattocks made his first Major League Soccer start, and found himself with several quality opportunities, but never challenged Seattle ‘keeper Bryan Meredith with any of his three attempts.

“I had four or five opportunities to put the ball in the back of the net,” Mattocks said. “That’s the life of a striker. I think I did really well, but unfortunately I was unlucky on a couple of those opportunities I missed. But I just have to look forward and move on. The best strikers in the world miss chances and I just have to move forward from there.”

It was strange hearing the Whitecaps lament poor finishing post-game, given Alain Rochat’s clinical start to the night, as he fired Vancouver into a 1-0 lead after just 12 minutes following a through ball from Omar Salgado.

The Swiss-Canadian drove into the Seattle box and admitted he was a bit shocked at how slow his opponents were to react.

“I was surprised myself to go through,” Rochat said. “I was looking for an option, but the way was open for me to go right to the goal, so I didn’t hesitate and had a good finish.

“I was looking for a partner free in the box, but when I saw I was free myself I thought, ‘let’s do it.’”

“It’s one of the ways Seattle attack,” Rennie said. “They look to put balls in the box. We’ve worked on it a lot, and we’ve lost a goal from it. Of course it’s frustrating. As a coach, any time you lose a goal it’s disappointing, but when you work so hard on the gameplan and things break down, it’s even more disappointing.”

Johnson played a part in the Sounders’ equalizer as well, outjumping Martin Bonjour for a header before Montero fired home with a curling effort from the top of the box.

“We lost a goal there right in the 90th minute through poor defending,” Rennie said. “We could have done better. It was a fantastic strike from Montero who does make a difference, but we played well enough to win the game today.

“We gave the fans everything we had, but at the same time we made a couple of technical breakdowns which cost us the win and that’s always frustrating.”

Camilo’s free kick goal in the 83rd minute, which Vancouver thought had won them the match, has been claimed by Gershon Koffie, and the club says the play will be reviewed.

The Whitecaps now prepare for the second leg of the Canadian Championship final at BMO Field on Wednesday, with the tie currently standing 1-1 on aggregate.