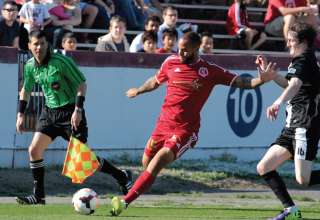 Last year, Canadian striker Kyle Porter made some positive impressions in his first MLS season — albeit with last-place D.C. United. Now that United has signed new players and shot up the table, Porter has found himself back on the developmental ladder; instead of MLS play, he’s spent a significant part of the season with the Richmond Kickers…

A rapid resurgence has transformed D.C. United from basement dweller to title contender. As the club zips up the standings, Kyle Porter wants to make sure he isn’t left behind.

Following a lengthy preseason trial last year, the soft-spoken Toronto native not only earned his first Major League Soccer contract — he emerged as a bright spot for United, making 27 league appearances (18 starts) and tying for the team lead with three goals. Sure, at 3-24-7, United posted one of the worst campaigns in MLS history. But the 24-year-old midfielder figured to be an influential piece of the club’s rebuilding puzzle.

Yet after, appearing in United’s first two matches of 2014, Porter has logged just three minutes from that point to mid-August. For segments of this season, he has been reduced to shuttling between D.C. and its third-tier affiliate, the Richmond Kickers.

“It’s been a tough season,” Porter said. “I’ve learned a lot about myself. As far as football goes, it’s been a mental battle.”

A product of the Vancouver Whitecaps’ residency program, Porter left the organization in 2011 for the NASL’s Montreal Impact in search of first-team football — something he wasn’t going to get with the Whitecaps’ move to MLS. But he found out that once the second-division Impact moved to MLS a year later, his rights would revert to Vancouver. So, Montreal didn’t work out — and Porter ended up at FC Edmonton for two seasons. While he was offered the chance to renew his contract with the Eddies in 2013, he instead chose to trial with United, which acquired his rights from Vancouver for a mere supplemental draft pick.

He brought pace and one-on-one prowess to both flanks, as well as a finishing touch. While United’s struggles naturally triggered plenty of offseason change — specifically, a completely reconstructed back line and forward duo — the midfield remained largely intact.

Days before the season started, however, United acquired winger Alex Caskey from the Seattle Sounders. In early April, a trade with the Chicago Fire for veteran attacker Chris Rolfe added another option out wide. Suddenly, Porter found himself buried on the depth chart.

“I thought I’d be a big guy coming off the bench, just to change the game,” Porter said. “[United coach Ben Olsen] told me he wants more competition, so I felt that was fair. But, as time went on, obviously I got more and more frustrated because I still wasn’t getting my chance, even after performing well in training.”

After playing such substantial minutes in 2013, Porter initially did not embrace his loan to the Kickers of USL PRO. For United’s loanees, a weekend with Richmond typically consists of slogging through I-95 traffic for two or three hours Friday, then playing a match Saturday and traveling back to Washington that night. It’s not soccer at its most glorious.

“Each player is at a different position coming in on loan,” Kickers coach Leigh Cowlishaw said. “Some are very young and they’re starting by getting minutes with Richmond. Some have played first-team football. Kyle had played a lot for D.C. the previous year, and that’s tough mentally to deal with.”

Once Porter shifted his focus to the loan’s benefits, it developed into a positive arrangement for all involved. In five matches with Richmond, Porter scored four goals — including a 90th-minute winner at Harrisburg in late May. The United-reinforced Kickers were competing for the USL PRO title (at press time the kickers had made it to the league semifinals), and Porter has relished the minutes that have been so hard to come by in MLS.

“You want to play at the highest level, you want to play with the first team, so initially you’re not happy,” said United goalkeeper Joe Willis, who has played 18 games for Richmond this season. “But I think [Porter] went about it with the right attitude. He took it seriously, worked hard and made the most of it.”

Porter hopes he can parlay his successful stints with Richmond into playing time for United down the stretch — and therefore bolster his Canadian national-team status. With coach Benito Floro building a core of young players, Porter is worried about losing his place in that picture because of a lack of top-flight minutes. After representing Canada at the 2013 Gold Cup, he is eager to earn a spot on the squad for next summer’s edition of the regional championship.

“I want to be representing Canada for that Gold Cup,” Porter said. “Canada hasn’t been able to play at the highest level in a long time. To represent the country and hopefully be the next generation coming forward to do that, to play at the high level, it’s everything. It’s my country — it’s in my blood.”

Throughout this trying campaign, Porter has turned to his closest friends in the United locker room — Eddie Johnson, Sean Franklin and Canadian teammate Nana Attakora — for support. Their message, Porter said, has been to remember “you’re a great player and you’re here for a reason, so continue to work hard and the right thing will happen.”

“He’s been extremely professional,” Olsen said. “He’s been very candid with me, and vice-versa. I still think he’s going to help us out this year, but it can’t be a lot of fun as a player not getting the minutes you want. It’s frustrating. But he’s gone about it in a very positive way, or as positive as you can when you’re in that situation.”

In addition to securing a playoff berth, United will look to navigate the CONCACAF Champions League group stage this fall — despite the terrible season in MLS in 2013, the team won the U.S. Open Cup.

Some new-found versatility could help Porter factor into the home stretch. After making brief appearances at right back in preseason, he started there in a friendly loss to English side Fulham in July. Although an ankle injury forced Porter to make an early exit from that match, he received positive feedback from the coaching staff. With lofty ambitions and a congested schedule, United does expect to rely on Porter before the 2014 season is done. Whether it’s in MLS or Champions League, in midfield or the back line, Porter is braced for that long-awaited opportunity.

“Patience is everything in this game, so I think being positive and working hard are the two things I just have to keep doing,” Porter said. “It’s not the easiest thing, but no career is easy. You’re going to have your ups and downs, but eventually I know the upside will come.”