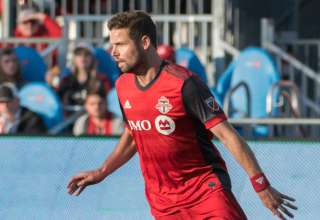 To say that the first leg of the Eastern Conference semifinal was an ugly affair would be an insult to the word ugly. No, it wasn’t quite 2016 MLS Cup bad in terms of anti-football, but it definitely made you wonder why you weren’t spending Tuesday evening watching The Flash, instead.

Sure, a 0-0 result on the road was a good one for a Toronto FC team that was without Sebastian Giovinco and Jozy Altidore; the Reds go home for the second leg knowing that they have no deficit to overcome. Columbus will no doubt draw inspiration from the Seattle snoozefest that was last year’s final and try to get some kind of stalemate in Toronto.

“There was a couple of acceptable results that we could live with, and this was one of them,” said Crew coach Gregg Berhalter. “It was one of the results we can live with. As the game went on, you saw how strong we were, how fit we were, and I think that’s going to bode well in the second leg.”

Depending on what the weather’s like at BMO Field next week, we can look forward to second leg that might be cagier than the first.

With their two most potent scorers serving suspensions, the Reds put Canadian Tosaint Ricketts up top and thumped some hit-and-hope balls his way, but it was pretty clear that the big goal was to get out of Ohio level. Ricketts had little in terms of support, and the Reds were far more concerned at breaking up Columbus’s counterattacks.

Still, despite the negative feel of the evening, the Crew will be thinking that it should have some kind of lead going into the second leg. Early in the second half, Pedro Santos made a clever run, slipped by the back line, and bore down on the TFC penalty area.

Keeper Alex Bono came charged out to meet Santos. The Crew man went down easier than a Schelotto on an ice rink, but the ball went over to Columbus teammate Ola Kamara. His wayward attempt was blocked by Reds defender Drew Moor; but it looked like the ball would have gone wide had Moor not been in the way.

Santos screamed and lobbied for a penalty, but referee Robert Sibiga motioned to the corner spot — in fact, the official flashed the yellow card at Santos.

The play was halted so the video could be reviewed, but there was nothing that showed that Sibiga had erred in not awarding a penalty. Replays indicated that Santos looked to be going down before Bono got to him.

Then, with six minutes left in regulation, the Crew’s Harrison Afful got a point-blank chance in the box after a dreadful clearing attempt from Moor basically presented the ball to the Ghanaian’s feet. But Bono blocked the shot, and TFC sub Raheem Edwards got in the way of the rebound.

And that, well, was that.