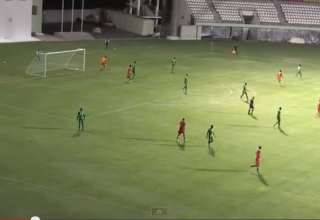 The shadows of Dominica.

So, Canada’s World Cup qualifying campaign began by only beating Dominica 2-0, in a cricket stadium that looked on the web stream that was illuminated by a single floodlight. The ball would disappear into the shadows on the wings, and then get crossed into the light. And then back into the shadows again. All it was missing was someone’s mom to come out and yell for a player to come in for supper.

Yes, keeper Milan Borjan got sent off for a professional foul late in the game and won’t be available for June 16’s return leg in Toronto. And, being Canadian soccer supporters, a lot of us will follow our instinctive nature to point out all the negatives.

But, truth be told, Canada was always comfortable in this game, and baying for a 10-0 in the modern game often equates to wishful thinking. Cyle Larin scored on a break early into the game. Russell Teibert hiding in the dark on the right wing, was able to find acres of space and deservedly was the one who went to the spot to score the second-half penalty. Tosaint Ricketts had a series of chances on goal. Tesho Akindele got cap-tied to Canada.

At no point was Canada uncomfortable in this match.

“I think we played a very good game,” coach Benito Floro said after the match. “We proposed that we would be serious in this game and to play Dominica with a lot of respect. We developed a strong pressing game, and at the same time we have had at least 12 or 13 scoring chances. Unfortunately we only scored once from open play and the penalty. The result was not correspondent with the play but it was good.”

And, Floro said he hopes that he can introduce two or three players into the fray in the second leg; again, a chance to get more players capped through senior A games.

But, heck, nothing I write here won’t stop you from fretting. So, panic away. Personally, I’m saving up all my worry for the women’s team, right now.