January 21, 2022
9 New Articles
Home Canadian Soccer The Association DeVos named new Director of Development: “I want us to qualify for every World Cup… every cycle” 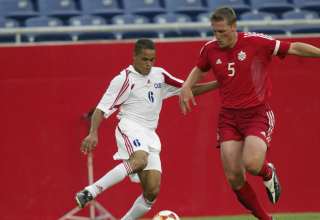 Jason DeVos in action for Canada against Cuba, 2003 Gold Cup.

Canada Soccer’s brand-new Director of Development has a simple mission statement, but a bold one.

“I want us to qualify for every World Cup, male and female, every age group, every cycle,” said Jason DeVos as he was introduced in a Tuesday conference call.

“Introduced” may be a bad word to use. DeVos, of course, has long been an advocate for improving the grassroots of Canadian soccer. A former national-teamer, he was part of the team that won the Gold Cup in 2000. He ran Oakville Soccer Club, one of the largest developmental programs in the country. And, of course, he’s been a colour commentator on TSN’s soccer broadcasts. DeVos has been one of the poster children for Canadian soccer over the last two decades.

DeVos will hit the ground running. On Sept. 5, he will meet the technical directors from the provincial associations in Vancouver, ahead of Canada’s World Cup qualifier at home to El Salvador.

And he believes it’s time for all coaches and soccer educators to get on the same page.

“Far too often, we don’t work as a team to develop soccer players in our country,” he said.

And while he sees Canadian players having a pathway that can take them from grassroots to elite-level football, what that map will actually look like is still up in the air. He said he wants to look at best practices around the world, but he said he understands that Canada poses unique challenges.

The first, and most major hurdle, is geography. DeVos grew up in a small town near London, Ont. To get to an elite-level team, his parents had to drive him two hours each way, four times a week, to Metro Toronto. He said this can’t continue to happen; the system must find a way to help kids develop, no matter where they live. He understands that some parents may not have the time off from work — or the savings accounts — to take their kids over great distances for practices and tournaments.

“We have to remove the barriers to participation, and barriers to selection, that are so often talked about from coast-to-coast,” he said.

“We want to give our coaches the biggest pool of players to choose from.”

And he said that means not every program will work in all parts of the country. Some projects will need to be tailored to specific areas of Canada. After all, the needs of coaches in Newfoundland might not be the same as those in metro Vancouver.

Look; Hockey Canada doesn’t really miss players. The provincial hockey organizations have a knack of knowing where to find players, if they play in the Toronto suburbs or a single-general-store prairie town. We aren’t there as a soccer nation.

DeVos repeated the message that a “uniquely Canadian” solution will need to implemented. He’s already on the clock.