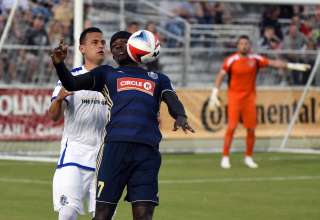 FC Edmonton made all sorts of preparations to ensure they hit the ground running when the NASL season began. The team spent two weeks in Manchester, England, playing the reserve sides of Premiership and Championship clubs.

Now, three games into the regular season, the Eddies have no points. Two losses to Jacksonville — which coach Colin Miller felt the Eddies deserved something out of — and a 3-1 beatdown in North Carolina last weekend have FC Edmonton in last place.

But, ahead of Saturday’s game at home to Puerto Rico, Miller is preaching patience, not panic.

“We had a long chat this morning, for upwards of 20 to 25 minutes, as well as a video session, about good things and bad things we did last week,” said Miller.  “It’s such an honest, hard-working group. Nobody’s pleased where we are in the league. But nobody’s panicking, there’s still 29 games to go here. Nobody’s getting after it and stepping out of line. Everybody’s working hard to do the right things, here. We’re not happy in any way, shape or form. We’ve played well at home, we deserved a draw down in Jacksonville, but we were very poor from front to back last week.”

Miller said last week’s loss to North Carolina was hard to swallow. The Eddies traveled to American south on a Wednesday for a Saturday game, so they had extra time to prepare. And, yet, soon after the opening whistle, they were down 2-0.

“I do a report [after every game] and that was as poor a report that I’ve written for the team,” said Miller. “And that’s very hard to take when you’re the one steering the ship. I’ve always said it’s our team when we win, and my team when we get beat. There were portions of that game I was cringing, watching, because it was one of Colin Miller’s teams and I don’t want that to happen again.”

Eddies fullback Shawn Nicklaw said if a team has a rough period, it’s best to go through it in early in the season, when there is plenty of time to fix things.

“It’s still early in the season,” said Nicklaw. “We’re going through a rough time, but it’s good to go through these things early rather than later on in the season. It’s tough, it’s a learning experience but, in due time, things will start to pick up.”

The Eddies have had decent possession stats, but have scored just once. And Miller said that it’s nice to have more of the ball than the other team, but it doesn’t mean a heck of a lot if you’re moving it around laterally in the midfield.

“If everything is in front of the opposition, we’ll never break down back fours,” said the Eddies’ coach. “We know this is a very, very difficult game Saturday. Puerto Rico have three draws and they’ve played well in all three games. They are very organized and fit team and they’ve been together for a long time.”

One thing that could work in the Eddies’ favour is the weather. As of Thursday, both the Weather Network and Environment Canada were calling for subzero temperatures and significant snowfall Saturday night. But Miller was quick to discount the weather and turf factors; he noted that when Canada faced Mexico at BC Place for a World Cup qualifier, the thinking was that the home side would have a huge advantage. The roof was open, the game was going to be on a surface the Mexicans weren’t accustomed to. As we all saw, and Miller recounted: “The Mexicans came into BC Place and took the ball off of us for 90 minutes.”

So, what does Miller expect for Saturday?

“It’s about us getting back to basics. We went down to Puerto Rico [in 2016] and beat them in that heat and humidity. They came here and parked the bus for 90 minutes, the last time they were here. They were actually wasting time 20 minutes into the game… But they’ve changed quite a bit from last year. They’re a good side, well coached and well prepared.”