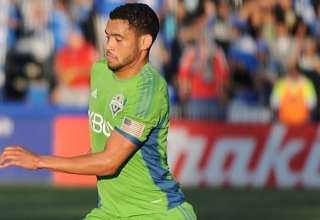 The eyes of the MLS world were on BMO Field Saturday for Clint Dempsey’s return to North American soccer, and while Toronto FC did its best to steal the spotlight, a critical own goal proved to be the difference in the 2-1 loss to Seattle Sounders FC.

The question going into the match was how TFC’s back line would fare against the high-powered Sounders attack of Obafemi Martins, Eddie Johnson and Dempsey, yet for the most part, the Reds’ defenders acquitted themselves well against the Seattle forwards. What ultimately doomed Toronto, however, was a pair of first-half mistakes, the second of which was an own goal from centre back Doneil Henry.

Sounders midfielder Lamar Neagle took the ball down the left side in the 40th minute and attempted a cross into the box. The cross bounced off of Henry’s back heel and was re-directed into the net, a touch that was half a lack of awareness from the young defender and half just flat-out bad fortune.

“It is pretty simple and unlucky as there wasn’t much I could have done about that situation,” Henry said. “Overall I thought we played a very good game. I just kept my head up and continued playing my game.”

It isn’t the first time that Henry has been responsible for a critical mistake with TFC and, frankly, you wonder how much playing time Henry would receive on an MLS club that wasn’t so often in dire straits on the back line. That said, the 20-year-old has also showed enough glimpses of potential to earn him caps for Canada and hints at a big future. On Saturday alone, Henry showed his quality with a perfectly-timed monster tackle on Martins that left the striker hobbled with an ankle injury that forced him from the game after 34 minutes.

It was Martins’s injury that led to Dempsey’s entry into the game, as the United States international stepped onto an MLS pitch for the first time since 2006. It was an earlier entry than expected for Dempsey, who began the match on the bench and was expected to see 30 minutes of playing time at the most. The forward had one solid chance in the game, a hard 23-yard shot in the 70th minute that required a leaping save by TFC ‘keeper Joe Bendik to bat it aside.

While Dempsey drew the headlines, the most impressive attacking of the game came not from the Sounders, but from TFC at the start of the second half. Jonathan Osorio cut the Reds’ deficit in half less than a minute after the break, and Toronto proceeded to dominate play for the next 25 minutes, coming perilously close to the equalizer on several occasions.

Robert Earnshaw’s 60th-minute attempt was the closest chance, as his ground ball of a shot took a big bounce off the right post. Osorio nearly struck again on a header off a Bobby Convey cross that went just left of the post, and a Richard Eckersley cross through the box in the 63rd minute barely missed a couple of outstretched TFC legs. In addition, the Sounders nearly delivered an own goal of their own when defender Leonardo Gonzalez inexplicably put a touch on a cross attempt (that was clearly going wide) and almost re-directed the ball inside his own post.

“We really did well to create two or three chances, especially in the second half. On another day they fall right to our feet and we tap them in but it wasn’t to be,” Earnshaw said. “From start to finish we were probably the better team throughout….But overall we can be pleased with this, we kept going for the whole game and put in all the effort. It was just tough luck.”

Earnshaw came off the bench to play 34 minutes, his first league appearance since July 17 due to a hamstring injury. TFC head coach Ryan Nelsen said he kept Earnshaw as a reserve since the striker hadn’t trained much with the club in the wake of the nagging injury, and also because incumbent forward Andrew Wiedeman had earned his spot in the Starting XI over the Reds’ two-game winning streak.

Earnshaw’s return will help lessen the blow of Jeremy Brockie’s departure, as the New Zealander announced via Twitter that Saturday was the last game of his loan deal. Brockie will return to the Wellington Phoenix of the Australian A-League after scoring a goal and three assists over 13 games with Toronto.

Brockie almost capped off his MLS tenure with a point-blank shot in stoppage time that required a tremendous save from Seattle goalkeeper Marcus Hahnemann.

“It would’ve been nice to finish that chance at the end, it would’ve been a happy ending,” Brockie said. “I’ve enjoyed my team here at BMO Field, the fans have been great, I just wish I could’ve put a few more in the back of the net for them.”

While Henry’s own goal goes down as the decider, Seattle’s opening goal stood out as the real big mistake for TFC as the entire back line was left lacking on a 16th-minute challenge. A pass to Johnson on the right side was headed back in the middle, where three Sounders were present against just Bendik and a lone defender. Mauro Rosales found the back of the net to become the recipient of the gift from the non-existent defence.

“It was just two silly goals, two silly errors,” Nelsen said. “I’m very disappointed in the first goal….The boys have three or four seconds to get back and commit to it and normally they’re very good about it. They’re devastated that a goal like that was conceded since we pride ourselves on not giving up soft goals.”

“It was a confusing play,” Henry said. “They kind of drifted back a little and we thought they were offside. It was a bit of a breakdown that happened. Really really unlucky today.”

Again it was Osorio who stood out for the Reds, as the midfielder scored for the fifth time this season and is now just one goal behind Earnshaw for the club lead. Wiedeman sent a cross into the box that found Osorio’s feet, and the 21-year-old made a nifty move to evade Osvaldo Alonso and bounce a shot that went just inside the right post.

Osorio has built himself a solid case as the MLS Rookie of the Year, and has emerged as Toronto’s most consistent player since becoming a full-time starter two months ago. It’s been quite a quick rise for a player who still says he needs to improve on “everything” about his game.

“It’s a big surprise but at the same time it’s not,” Osorio said. “I knew that if I worked hard, good things would happen. I know I have the talent to play in this league so if I work hard and improve the weaknesses I have, I know I’ll be a good player in this league.”

Nelsen agreed, noting that while the coaching staff thought enough to promote Osorio from the TFC Academy to the regular roster after training camp, he was still surprised at how well Osorio has adapted to the higher level of play.

“Did we know he’d have an impact like this? No. Did we think he was going to have an impact? Yes, but it’s just determining when and at what time,” Nelsen said.

The defeat cost TFC a chance at their first three-match winning streak since July 2012. With (winnable) upcoming games against Columbus, D.C. United and New England, the Reds have a chance to gain some points and help salvage their season if they perform as they did on Saturday.