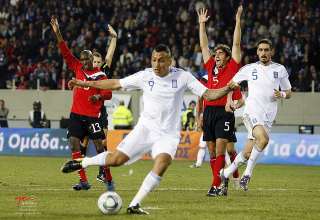 The kid they call the Greek Messi got a gift.

Ioannis Fetfatzidis placed a shot underneath the crossbar after a miscue from Canadian defender Adam Straith — and his goal was enough to give Greece a 1-0 win Wednesday in Larissa.

For an hour, the Canadians held the Greeks to a couple of mediocre scoring chances, but were doing well to frustrate the hosts. If Canada is to survive CONCACAF, our national team will need to go to hostile envrionments in places like San Jose and Tegucigalpa, and at least come out with draws. So, going to Greece and playing on what looked to be an awfully slick playing surface was a good test for the Canadian squad.

But it came undone at the one-hour mark on what looked to be a speculative yet harmless attack from the Greeks. A long cross was played into a box filled with Canadian defenders and only the diminutive Fetfazidis representing the Greeks. Fetfazidis is known as a magician with is feet, but not a factor in the air. Adam Straith, unchallenged, turned to clear the ball — and it all went wrong. His miskick fell right to Fetfazidis, who immediately placed the ball in the goal before Canadian keeper Milan Borjan could recover.

Canada started well: After Will Johnson got a talking-to from the referee for a late challenge, Josh Simpson saw yellow for a late challenge on veteran Greek midfielder Kostas Katsouranis. The Panathinaikos midfielder stayed down for a couple of minutes, but didn’t need to be subbed out. But, as confirmed by a crunching tackle from Adrian Cann just seconds after the restart, the Canadians were not holding anything back.

Canada enjoyed some very good spells of possession, and Simpson and fellow midfielder Will Johnson did well chasing the ball and pressuring an aging and slow Greek fullback corps. But, as Greece often do, the back was packed with defensive players, making it difficult for the Canadians to forge a chance. Simeon Jackson fired a low shot just wide after a Greek giveaway. But in terms of shots that troubled the keeper, Canada provided little in the first half.

Meanwhile, Canadian keeper Milan Borjan, making his debut in goal, had even less to do in the first half than his Greek counterpart. Centre backs Dejan Jakovic and Adrian Cann were rarely troubled — and you had to wonder if those early tough tackles from the Canadians had made their opponents nervous about going in for 50-50 balls and challenging defenders. Greece had only one shot of note, a turnaround snapshot from Dimitrios Salpingidis that just went wide. Salpigidis did well to collect a low cross from Sotiris Ninis, but couldn’t control the shot. Ninis had generated some interest from Manchester United in 2010, but didn’t make the move from Greece.

In the second half, after Greece made wholesale changes to boost the team’s energy, sub Kostas Mitroglou made a great run down the right side, got to the touch line and was able to get a low cross in front of the Canadian goal, that Jakovic did well to clear away from the danger area before a Greek striker could slam the ball into an open goal. Ten minutes into the second half, Mitroglou, who was Greece’s sparkplug, got behind the Canadian backline, but Borjan came out to cut off the angle and blocked a weak effort.

Greece was getting some half-chances, but were still looking like they would be challenged to beat Borjan — until the Straith error. After the goal, Greece was energized, and Fetfazidis had a decent chance to double the lead on a low drive from just outside the box that Borjan did well to save — and then cover the rebound.

With 15 minutes to go, and Greece dominating possession, Canada got the chance to connect with a counterpunch. On a free kick, Dwayne De Rosario fired an effort that sub keeper Kostas Chalkias had to stretch to tip over the bar.

Canada had one last chance left. Four minutes from time, Rob Friend, left unmarked, had a free header off a corner kick, but directed the ball just wide of the left post.

While Canada has not officially confirmed the match, FIFA shows that our national team will play Belarus March 29 in Antalya, Turkey. The CSA has confirmed that it was negotiating with another country to play a friendly in a third-party venue.