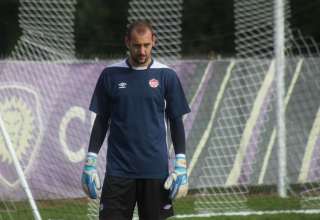 It’s Canada here. Or, more specifically, the Canadian soccer community. You might remember us. Our team was (briefly) at the World Cup the last time you hosted it. We didn’t score a goal — but we didn’t get blown out despite being in a horrible group.

You beat us a couple of times earlier this year. And, maybe, you’d want the chance to get another shot at us in the Hex. We’d really, really, like to get there. Except we’ve got this one problem. It’s the same problem we always have.

Somehow, we got out of there Friday afternoon with “just” a 2-1 loss. Really, if it wasn’t for our keeper, Milan Borjan, a crossbar, and some really poor Honduran finishing, it could have been out of sight.

You’ve already qualified for the Hex. Congrats on that. We never doubted you. But, if we’re gonna join you in CONCACAF’s final group of six, to keep our flickering World Cup dreams alive, we need your help, big time. Honduras is three points up on us but, more importantly, it is five goals ahead of us when it comes to goal difference.

So, when you host Honduras Tuesday, please, please, please, kick the living bejeesus out of them. Our team will try to do its part; Canada needs to win big at home to El Salvador. We have a feeling that BC Place might feel like we’re bidding farewell to our World Cup qualifying campaign, but there’s hope, right?

But nothing we do matters without your help. We didn’t help ourselves on Friday. If you didn’t see the game, well, Borjan robbed Lozano in the 25th minute with an outstanding save on Antony Lozano. We should have been down 1-0. But we weren’t.

It was hot, something like 33 C. The field was bumpy and soft, sapping our defenders legs with every step they took.

Yet, believe it or not, we took the lead. In that house of horrors in San Pedro Sula where we lost 8-1 four years ago. Scott Arfield lofted a corner into the Honduran box, and Manjrekar James rose to meet the ball. It went in!

(Maybe you’ll understand why the idea of a centre back being the one to score the goal is kinda funny to Canadians. Maybe you won’t.)

But, in the sapping heat, well, the Canadians simply couldn’t hold up. The Hondurans came at us in waves. Lozano should have equalized, but Borjan dove and our midfield general, Atiba Hutchinson, each sprawled to deny the chance. It looked like the ball got a piece of both of them before going out for a corner.

Then,Borjan made another fine diving stop on the ensuing corner. But Honduras kept the ball and kept pressing. And, finally, a shot from Mario Martinez navigated its way through the crowded penalty area and nestled into our net.

Still, somehow, at halftime, we were tied, right? We would have taken that at the start of the game. Sure, our guys were gassed. But, we had hope.

But it didn’t take long for that to all come undone. Just a few minutes into the second half, our team got way too excited and got caught upfield. The Hondurans came at us on the break. Look, we know that, on the road — we should NEVER get caught like that. But we did. And Alberth Elis popped the ball over to the back post, where Romell Quioto was there to meet it and put it in.

Quioto totally beat our right back, Doneil Henry, to the ball. Henry doesn’t play right back except when he plays for Canada. But that’s a Canadian thing. We like to make it hard on ourselves by playing our guys out of position. And to make it truly Canadian, we then rip our players for making mistakes even though they play out of position. You see, we’re so sure that if we really tried, we’d be good at soccer. But we prefer to make it a self-loathing kind of thing.

But our Canadian cultural quirks aren’t your problem. We get that.

Somehow, though, Honduras didn’t score a third or a fourth or a fifth. There were penalty shouts against Canada that were waved off by the Cuban ref. Boniek Garcia banged a shot off the bar.

In the end, though, it was yet another loss in Honduras.

So, can you do us a solid? Beat Honduras. Bad.

Look, the editor of this site went for a nice family vacation near Playa del Carmen a couple of years ago. The family loved it. The people were great and welcoming. The weather was fantastic. The iguana-overrun Mayan ruins at Tulum? Sweet!

Look at how nice we are to you whenever we go to Azteca. We don’t win. We’re gracious visitors. We make sure the home fans go home happy.

Come on, you’d like to play us again in the Hex, right? Help us out. We need it.