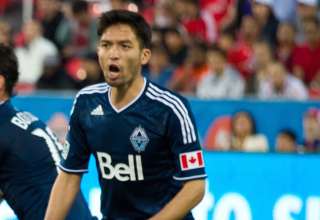 Jun Marques Davidson lost his head and the Vancouver Whitecaps lost the game Saturday night, falling 1-0 to the Philadelphia Union in front of 21,000 at BC Place.

Referee Baldomero Toledo sent Davidson off just eight minutes in after the Japanese-American headbutted Union midfielder Keon Daniel. Davidson’s reaction was a result of a reckless challenge just moments prior, in which Daniel lashed out at him while he was in a vulnerable position.

Eventually the man advantage paid off in the 85th minute, as substitute Antoine Hoppenot scored a late winner to secure the win for the visitors.

After the match, Davidson took responsibility for his actions.

“It’s very disappointing and what I did was wrong.”

Whitecaps head coach Martin Rennie said following the match that he had no problem with the referee’s decision to dismiss his midfielder, but admitted that sending off played a big part in the game’s outcome.

“The obvious pivotal point in the game is early on in the game when Jun Marques gets sent off,” Rennie said. “He reacted in a way he shouldn’t have, he made a mistake, and ultimately we paid the price for that, because I thought we played well after that.

“I was really proud of the players effort and desire. Even with 10 men they had a lot of chances and put a lot into the game.”

When asked if he would lose trust in his former Carolina RailHawks player as a result of the headbutt, Rennie displayed a bit more patience than his shutdown midfielder.

“It’s frustrating when something like that happens,” Rennie said. “But you have to take a step back and decide about that later.”

The defeat ends Vancouver’s 2013 home unbeaten run. Due to Davidson’s red card, and a yellow card picked up by Gershon Koffie, that means the club will be without two starting midfielders for next week’s match against the Portland Timbers.

“There’s other players ready to play,” Rennie said. “There’s good players who are not on the starting lineup. It’s up to them now to get into the lineup and do well and take their chance. If a player is out via suspension, then they pay the price for that.”

Going into the match, a big talking point was whether goalkeeper Brad Knighton would lose his starting job to newcomer David Ousted. Knighton had a strong enough game in the Whitecaps goal and seemed pleased that Rennie stuck by him after last weekend’s defeat to the Los Angeles Galaxy.

“That shows a lot from the manager, having belief in you, and giving you a run of games,” Knighton said. “It’s huge for my confidence and it’s up for me to keep this shirt. It’s based how I do in training and how I do in the games. But obviously having the backing from the manager is huge.

“Like I said from the get-go, I’m trying to get this team points and up the table and as many wins as possible while I’m in there. That’s my job and we look for next week. We’ve got a massive game against a Cascadia rival and it’s going to be a huge one for us down in Portland.”

With this defeat, the Whitecaps fall to 9-7-5, and will look to bounce back against the Portland Timbers down at JELD-WEN Field on Saturday.