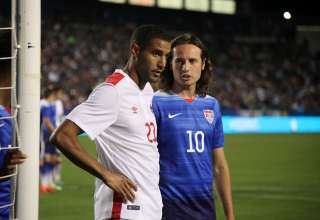 It wasn’t hard to find the man-bites-dog angle in the United States’ 1-0 win over Canada Friday in Carson, Calif.

The friendly was decided just before the 90th minute, thanks to a perfect cross from Ethan Finlay that found the head of Jozy Altidore, who simply overpowered Canadian fullback Sam Adekugbe in the penalty area. The irony is that Finlay had been the subject of some will-he-play-for-Canada speculation over the past couple of years — and Canadian coach Benito Floro admitted that some overtures had been made to the American-player-with-Canadian-lineage.

Minutes after coming on as a sub, Finlay provided the goal for Altidore — who, had he been shooting straight, would have easily had a hat trick.

With Friday not being an official FIFA international date, neither Floro nor U.S. national-team coach Jurgen Klinsmann had anything close to a full-strength lineup at their disposals. Floro gave debuts to central defender Steven Vitoria — recently repatriated from the Portuguese program — and goalkeeper Maxime Crepeau, who both started.

Crepeau was brilliant. But Vitoria’s play  was troubling — not showing Canadian soccer supporters signs that he could become a starter when Canada faces Mexico in a pair of World Cup qualifiers in late March. In fact, Vitoria’s flat-footed play was, in many cases, the unfortunate catalysts for Crepeau’s brilliance.

Early in the first half, Altidore collected a pass in the Canadian penalty area. Vitoria was goal side, but he was simply brushed aside by the American forward, and the Canada was lucky to see Altidore’s strike crash off the post. Vitoria was also caught out of position on an American break, where a pass from Gyasi Zardes found the much-hyped new Seattle Sounder, Jordan Morris. The American phenom’s chip went just wide.

Crepeau also made excellent saves on Zardes, Altidore and Brandon Vincent; all three had great looks from inside the penalty area.

Altidore also had an open header (after Vitoria lost his mark in the penalty area) that he put well wide. Even though the Toronto FC striker scored the winner, his wasteful play certainly won’t earn him a lot of rave reviews from Reds supporters. With as many open looks as he had, he should have brought back a return of well more than one goal.

But, let’s be clear; this was a game that allowed Floro to look at the fringes of his depth chart. Wandrille Lefevre and Vitoria — who were the centre-back pairing in the first half — only didn’t yield a goal because of Crepeau and sloppy American forward play. We simply didn’t see enough of Jamar Dixon, who also made his debut as a second-half sub, to judge him fairly. Adekugbe got caught in a mismatch with the much bigger and stronger Altidore. Doneil Henry came in and had to play as a fullback – not in the middle where he should be more effective. Second-half subs Issey Nakajiama-Farran and Iain Hume — veterans who have given a lot to Canada in their careers — aren’t the future of this team.

So, is it bitter to lose to the Americans? Sure. But does it tell us a lot about the Canadian team ahead of the big pair of games against Mexico? Not really.