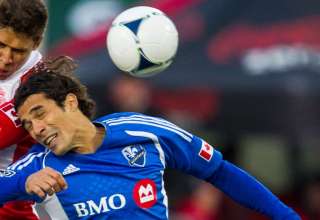 The Montreal Impact came away from this afternoon’s game having achieved a number of new firsts. Today’s 2-0 triumph over the visiting Portland Timbers stretches the club’s unbeaten home streak to three games and gives the team its first clean sheet in MLS play.

Beginning his remarks to the media in French, head coach Jesse Marsch pronounced himself happy with the team’s performance Saturday, saying that the next month is an important one for the Impact, with a lot of crucial games on the calendar.

“We felt all along that the team is coming together in a good way,” he continued in English. “We knew that we can still get better, and this is no disrespect to Portland, because they have a good team despite a difficult start, but today was a good performance and a dominating performance from start to finish.”

The Impact got a pair of second-half goals, one from striker Bernardo Corradi, the other from emerging “Super Sub” Sinisa Ubiparipovic. Combined with the absence of the momentary let-downs that have plagued Montreal since it took to the field in Vancouver in early March, the club was able to send most of the 19,223 in attendance home more than satisfied with their team’s first clean sheet.

The only ones leaving with less-than-happy memories of the game were the squadron from the Timbers Army, some 20-strong who traveled three time zones for today’s match.

In a first half completely dominated by the home team with the exception of the shots on goal column, Impact left-siders, midfielder, Justin Mapp, and backliner, Tyson Wahl, combined repeatedly, leading to most of the Montreal challenges to the Portland Timbers defence.

Mapp was at the origin of a Davy Arnaud shot that the Impact captain chipped over the Portland net in the 14th minute from the top of the goal area and, four minutes later, he missed the net himself, sending a Corradi pass wide to the right of Troy Perkins’ net. Arnaud dribbled out of the corner in the 23rd minute, finding Felipe but the Brazilian’s shot was caught by a diving Perkins.

Moments later, Mapp began a play that saw forward Collen Warner dribble past two opponents and close in on net before having his progress thwarted. The Impact captain had another chance in the 37th minute but an alert Perkins came out to meet him, nullifying the threat.

Portland’s only viable opportunity came in the 37th. Team captain, Jack Jewsbury, long a Kansas City teammate of his Montreal counterpart, Arnaud, got off a rising shot that Donovan Ricketts managed to pull in as he dove to his right. Portland coach John Spencer used one of his changes early on, subbing in defender Freddie Braun for Steve Purdy in the 19th minute. Purdy, who had a mid-air head-to-head encounter with Mapp in the 11th minute, left the field for treatment alongside one of the Timbers training staff.

The second half unfolded following the same template as the first, with the Impact dictating pace and procedure. Fifty minutes in, Arnaud put a Sanna Nyassi pass over the bar.

Eight minutes, later one of Montreal’s few miscues on the afternoon led to a Portland opportunity but defender Matteo Ferrari, who, along with Shavar Thomas sealed the centre of the Montreal back line, nullified the attack.

In the 62nd, Nyassi had a shot stopped by Perkins in what proved to be the Portland keeper’s final minutes of action for the day. In alone in the 64th minute of play, Nyassi collided with the onrushing Perkins, who came out second-best in the encounter, his nose contacting with the Ghanaian forward’s and forcing his withdrawal from the match. Incoming keeper, Joe Bendik, got his first taste of MLS Action as a result and was the man in the net for both Montreal goals. A 72nd-minute header by Collen Warner found the twine but was called back on an offside.

Bendik was not so fortunate on the 76th minute penalty kick awarded after the Timbers were called for a hand ball in the penalty area. The Corradi kick eluded Bendik and gave the Italian import, signed through the end of June, his third goal in as many games when he shot the ball cleanly into the mesh.

“We played a good first half, even though we were not as focused on the last pass as we could have been because we missed two chances,” Corradi offered. “The strength of this team is that even the guys coming off the bench did great jobs, Lamar (Neagle) and Sinisa. This is important because we have eight matches (in a short time) and everybody feels they can make contributions to the team. It’s important everybody has to feel part of the club.”

The Italian striker began blowing kisses to his parents, in town for the past week and heading home to Italy tomorrow. “They’re just here for a week and they’re heading back to Italy tomorrow. I saw my mother but my father was probably walking around the stadium somewhere. He has a difficult time watching me play.”

A second marker came in the 76th minute on a play started by Corradi, named the Player of the Game for his performance this afternoon. He found Arnaud who relayed the ball to Ubiparipovic, who shot from the six-metre box, putting the ball into the roof of the net to seal the game’s outcome for the home side.

Asked how he felt about being tagged with the Super Sub label, Ubiparipovic quipped, “As long as we win and I score you can call me whatever you want.”

Impact uber-fans, the Ultras began calling insisting loudly and repeatedly for Cuban-born, 39-year-old MLS rookie, Eddy Sebrango, to take to the field. It was not until the final minutes of play that their wish was granted.

“I was very nervous,” admitted the veteran striker, who came in for Corradi in the 89th minute. “During the run from the warm-up to the bench I was very nervous. I didn’t even know how to run,” he continued.

Montreal meets Toronto FC at Olympic Stadium on Wednesday in the first of their matches in the Amway Canadian Championship. The second game of their leg is scheduled for May 9 in Toronto.

THROW-INS – The Timbers and Impact faced each other 15 times in Division-2 play between 2001 and 2010 with Portland posting a cumulative 8-4-3 record against today’s hosts. They also hold a 4-1-2 edge in games played in Montreal

• Timber forward, Mike Fucito, until very recently a member of the Impact, was held out of today’s game as per an agreement made between the teams at the time of the trade.

• Going into today’s game only goalkeeper, Troy Perkins and defender, Eric Brunner had played every minute so far this season for the Timbers while, keeper, Donovan Ricketts, defender Matteo Ferrari, and midfielder Felipe had done likewise for the Impact.