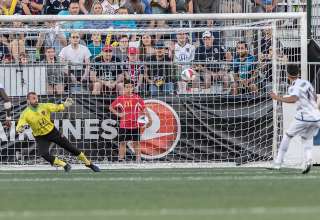 Throughout the NASL spring season — and the first game of the fall campaign —  FC Edmonton, the league’s lowest scoring team, gave its fans many examples a game of how not to score from in close. Goalposts, great saves, missing the net from point-blank range;  an Eddies highlight real could be simply called a series of unfortunate events.

And, through the first half of Saturday’s game at the Indy Eleven – the team that beat the Eddies 2-1 at Clarke Stadium just a week before – it was more of the same. Daryl Fordyce had an open look at goal after Tomi Ameobi headed a ball down; he put his shot right at Eleven keeper Jon Busch. And, Ben Fisk put a shot off the post after a nice pass into the penalty area from Shawn Nicklaw.

When, early in the second half, Tomi Ameobi’s deflected header was stopped by Busch right on his own goal line, any FCE supporter would be excused for thinking “here we go again.”

The Eddies created the lion’s share of the chances and it looks like coach Colin Miller’s decision to go into the fall season with a more aggressive, attacking style may be paying off. Last week the Eddies, playing in a 4-1-3-2, created a slew of good chances but could only convert one of them and ended up losing.  But, in the return match at Indy, the chances kept coming and, as is the case so often in soccer, when a goal is scored to break a slump, it’s quickly followed by more.

Miller said he had a “heart -to-heart” with the team before Saturday’s game.

“It’s a great team performance against the in-form team in the league,” said Miller. “Now we will use this to kick start our fall season and, fingers crossed, we can build on this.”

Corea gave the Eddies the lead from the penalty spot after Pedro Galvao was taken down in the box by Indy’s Marco Franco. The Indy defender was the source of some controversy in the first half when his challenge in the box brought down Ameobi. The Eddies protested that a penalty should have been awarded. So, when Franco was at the centre of another dodgy challenge in the box, he gave referee Guido Gonzalez no choice.

But the 1-0 lead didn’t last long. Six minutes after Corea scored, Watson got the last touch to a corner kick. The ball bounded just inside the post and… did it cross the goal line before it was smothered by Busch? Gonzalez thought so — and the Eddies were up 2-0.

Nemanja Vuckovic got Indy back in the game with a stellar free-kick effort, but Corea wrapped up the points by getting on the end of a low cross from Fordyce. In the build-up, a long ball went off Ameobi’s chest and ricocheted off his arm, a glancing blow that either wasn’t seen by the ref or was deemed to be ball-to-hand.

But, this was a night where the Eddies were getting the breaks. And, now, two games into the fall season, the Eddies have three points from two games — and four in the goals-for column. The new-look formation is making a difference.

“It’s massive,” said Miller. “It takes a lot of weight off of everyone’s shoulders because the longer you go without a win, the more the pressure builds. We’ve never wavered and never faltered, and the message has been consistent.”