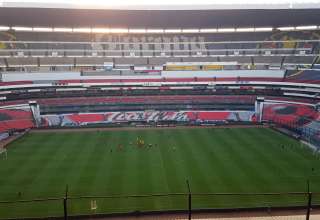 Azteca Stadium: If only it had artificial turf...

MEMO: On April 10, the heads of the Mexican, American and Canadian soccer bodies will gather in New York for a “special” announcement. We all know it’s going to be the official kickoff of the Joint CONCACAF Superbid (™) for the 2026 FIFA World Cup (™).

For one, well, FIFA rules state that, for senior tournaments, all games have to be played on the same type of surface. So, of COURSE that means Mexican and American venues are going to have to make sure they’ve got artificial turf to match the Canadian standard! Yes! I can’t wait to hear droning international-feed commentators moaning about how brutal the turf temperature is at Azteca Stadium during an afternoon game in July.

“Clive, I think the French goalkeeper just combusted. Blew up right in front of our eyes.”

“Oh my god, that turf is hot. It’s been at least 45 seconds since we’ve had our last turf-temp update. Let’s get another!”

Like, really, who puts grass in stadiums anymore? The kind of people who still know what a Sidecar is and smoke when they’re pregnant, that’s who. Want to put some grass down in your stadium? How about buying some eight-track tapes while you’re at it? Hey, I hear Beta is cool!

As anti-grass Canadian, I’ve been symbolically helping by trying to kill the grass on my lawn for a few years, now.

Next, with Mexico, the United States and Canada splitting the bid, we pretty well know right now which country is getting stuck with the third-place game. Yeah, we’ll be seeing the world in Edmonton for that one.

But, what about a three-country opening ceremony? Will Rush need to belt out “New World Man” in Spanish? Maybe Terry Jacks can perform his re-written version of “Seasons in the Sun” with a chorus of Tigres supporters backing him? Maybe Drake can do a poetic rendition of the NAFTA agreement?  I’d like to just put in my vote right now for LCD Soundsystem’s “North American Scum” as the theme song for the 2026 World Cup bid (and for the World Cup, if we get it).

As for those who travel to this continent for the World Cup, will they get a special pass to get them through the wall? Oh, yeah, the wall! Like that’s not going to be a giant elephant in the room during the bid kick-off press conference.

“So, um, you’re all bidding together, but America is looking at building a wall between itself and Mexico.”

That should be a little bit uncomfortable for Mexican Football Federation President Decio de Maria and United States Soccer Federation head Sunil Galati. I’m sure they’ve spent some serious time with their PR people going over exactly what to say when that question comes up.

And, of course, there are those who will say “but Trump won’t be president in 2026.” That’s not the issue. The issue is who will be president when FIFA votes on who will get the 2026 World Cup. And Trump will likely be in the Oval Office when that vote is taken.

But, let’s just pretend that this World Cup bid is successful! My dream World Cup group would be one that sees teams travel from Cancun to Honolulu to St. John’s. That would be awesome — and would have almost as many travel miles as an average FC Edmonton road trip!

But the best part of this… is Canada qualifies for the World Cup! Yeah! I was 15 years old when Canada played in Mexico’ 86, I’ll be, whoa, get the calculator, 55 when Canada plays at World Cup 2026! Unless, of course, I die first. I mean, at what age does that become a worry?

Kidding aside, with the World Cup format expanding to 48 teams, and the costs to host the mundial only increasing, continental superbids will become more common. It’s simply too much to ask one nation to put aside the billions of dollars or Euros needed to host a 48-team tournament on its own.