May 16, 2022
9 New Articles
Home NASL & USL More NASL & USL Commissioner: NASL does not want to be an affiliated developmental league 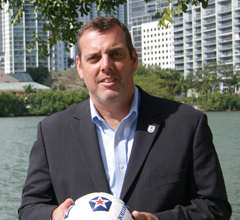 NASL commissioner Bill Peterson doesn’t believe the new USL-MLS partnership will affect his league at all.

On Wednesday, MLS announced a partnership with the third-division USL Pro. MLS teams can affiliate with USL Pro teams, start their own USL Pro affiliates, or keep their current reserve setups, with games scheduled against USL Pro teams. Canadian Soccer Association President Victor Montagliani has stated that if the three Canadian MLS teams launch affiliates in Canada, they would be seen as part of those clubs’ structures and would not be sanctioned as Div. 3 clubs in this country.

Peterson said that NASL does not have an interest in being an affiliated minor or developmental league.

He warned that players who are signed to low-end entry-level MLS deals may also find their options are even more limited than before. Instead of being waived and having the chance to find work, they could end up being stashed in USL, with no hope of getting back to the top tier.

“From the MLS side of things, I can see why this good for them. Each team can have more players under contract. They can hold on to more players. But, for the players, this limits their free-market options, when they find that they have been relegated to playing for a minor-league team.”

“Puerto Rico is making some progress,” said Peterson. “It’s going to come down to timing. It’s a question if they can get everything done in time, before we release the fall schedule. If they don’t get it together, they will be pushed back to next spring.”

Peterson didn’t say this — but there is a feeling around NASL that not too many tears would be shed if the Islanders didn’t come back. The other teams would be freed of their most expensive, punishing road trip of the season. And, with Indianapolis, Ottawa, New York Cosmos and the D.C. suburbs all coming into the league over the next two seasons, losing one distant market is a tradeoff many would be willing to make.