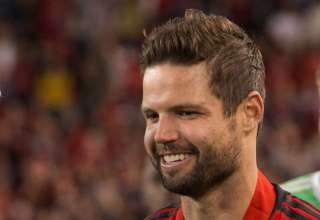 It was the second leg of a CONCACAF Champions League round-of-16 tie, but Tuesday’s 0-0 result between Toronto FC and the Colorado Rapids showed what is sure to be a growing issue for MLS.

The Rapids played probably as well as they could at BMO Field, Toronto FC was as indifferent as it could be. Still, the Reds had little difficulty protecting the 2-0 advantage it held from the first leg. TFC will move on to face Mexican powerhouse Tigres in the quarter-finals.

The Rapids were consistently able to get the ball wide down the right side, and were able to swamp the midfield, win balls and get shooting opportunities from the top of the box.

But the quality of the Rapids’ finishing… well “finishing” is a poor choice of a word, isn’t it? “Finish” suggests that there was some sort of indication that somebody on the Rapids could put a ball across the goal line.  And the deliveries on crosses were, gulp, worse. Deklan Wynne, who was previously with the Whitecaps’ USL affiliate, continued to get into good spots on the wing and regularly delivered lead-footed crosses that a forward would need to be an 11-foot-tall colossus to handle.

It’s simple. The Rapids simply don’t have the talent up front to make up the gulf between itself and a DP-laden club like TFC.

In the MLS of 2018, TFC leads a true first division of clubs that are spending and pushing the envelope. Atlanta United, NYCFC and Seattle are members of this group, among others. Colorado, though, is part of the MLS old guard (we see you, New England Revolution), hoping that having decent players throughout the squad will obscure the fact that there are no gamebreakers to be found. Teams built like the Rapids used to be able to limp along, make the playoffs and then go on a run. But those days look to be over. There is a clear arms race underway in MLS, and owners looking to just get by are going to find that you can no longer get away with “meh.”

Dominique Badji blasted a shot off the post in the 40th minute, but he also put some tame efforts right into the hands of TFC keeper Alex Bono. Enzo Martinez, a USL and NASL veteran, had a great chance in the 55th, but put the ball right at Bono. Colorado forward Jack McBean had a chance from the top of the box, but scuffed it.

Toronto defender Drew Moor had a great chance to score a late cherry-on-top goal for the Reds, but his header was palmed away by Zac Macmath, playing in the Rapids goal ahead of Designated Player Tim Howard.

Colorado simply didn’t have the quality in its attack to be able to put a shot towards the roof of the goal, or into the corners. Each time a player set up to shoot, it was a clear casehit and hope.

Teams like TFC are trying to push the level of MLS forward, but it’s clear that not every team is coming along for the ride.