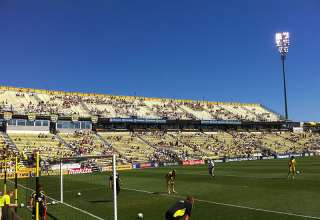 The announced attendance was officially 4,665 but the few brave souls that turned out to Crew Stadium for the first leg of the CONCACAF Champions League quarterfinal numbered less than that.

The chill in the air from a recent Ohio cold snap made the match a challenging proposition for both Columbus and RSL. The match finished in a 0-0 draw.  Will Johnson, who has played in harsh conditions throughout the world, called it the coldest match he can remember.

“It was a bit unfortunate with the temperature drop,” said Johnson, who suggested that there were icy spots and the ball bounced a lot. “The field yesterday when we trained on it was great. It got cold last night, it snowed and that was that. Hopefully, our field will be better.”

RSL manager Jason Kreis promised as much. Kreis said he was told that the Crew Stadium pitch would be covered but before the critical match but was disappointed to find that wasn’t the case.

“Hopefully, we’ll have better weather,” he said of the return leg set for March 1.