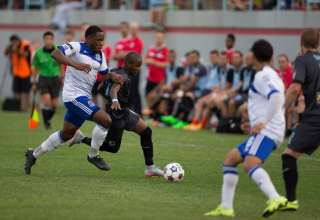 If there was ever a sign of parity in a sports league, that’s it.

But, the funny thing is, there shouldn’t be that much parity in the NASL. While by no means are the teams spending millions of dollars on salaries, there is no salary cap. And teams like the Atlanta Silverbacks and Carolina RailHawks come nowhere close to the budgets of the New York Cosmos or Tampa Bay Rowdies. This is a league — despite its official second-division status — that advertises itself as the home of laissez-faire competition, and its hardcore evangelical supporters pooh-pooh the Animal Farm salary cap of MLS (where all teams are equal, but some are more equal than others).

FC Edmonton is right in this mix, two points out of what is likely the fourth and final playoff spot, with 12 games to go. On Sunday, the Eddies begin a spell of four out of the next five games at Clarke Field; they’ll host the Carolina RailHawks, who are one point up on Edmonton in the overall table.

With the standings being so tight, coach Colin Miller said the team has to treat its remaining schedule like “12 Cup games.”

Miller said the NASL is proof that money doesn’t always buy success. He saw the budget-challenged Atlanta Silverbacks come into Edmonton a couple of weeks back and win (impressively, at that).

On Wednesday, Miller watched the Scottish Premiership match between Celtic and Kilmarnock, which ended up tied 2-2. And he said that game works as a perfect analogy for the NASL.

“On one side, you had all the millionaires on Celtic, and then you had the Kilmarnock players, who are basically fighting for their livelihoods. And Kilmarnock gave them all they could handle; just because you spend all the money, it doesn’t mean you have success.”

Miller said there are three categories of teams in NASL, the big spenders (think New York, Minnesota and Tampa Bay), the mediocre spenders (FC Edmonton and Ottawa fit in here) and the budget-challenged teams (like Atlanta and Carolina). But he said that the ambition of the players acts as a great equalizer. There are a lot of players in NASL who want to prove points about themselves. There are lots of players with chips on their shoulders.

And, with so many players wanting to prove themselves, you get lots of gritty performances that can cancel out the presence of the big-salary players.

The other parity factor is the relatively small size of the league and the closeness of its coaching fraternity. It’s hard for any team in this league to do something that catches the rest of the league off-guard. After all, despite grand plans for growth and expansion teams coming in over the next several years, the current roster of teams stands at 11.

“Teams in this league are prepared very well,” said Miller. “You know that when you play against Carolina this weekend, you are going against a well-prepared team, and (Carolina coach) Colin Clarke is one of the best in this league.”

“The teams are very well prepared for each other. When it comes to formations and preparing teams, there’s very little difference between this league and MLS. Whenever the teams face each other, the coaches have the players ready so they know how to stop each other.

“If you look at it, you had New York on top (in the spring season) and where are they now? And you had Ottawa near the bottom (in the spring) and now they are at the top (of the fall season standings). Everybody in this league talks about Minnesota, they are the supposed to be the best team in the league. We played them last week and, yes, they dominated in the first half. But then, in the second half, we showed we could play against them or against any club.”

In NASL, the winners of the spring season (Cosmos) and fall season (Ottawa leads) get the top two seeds in the post season. The three and four seeds go to the next-best teams in the combined standings.