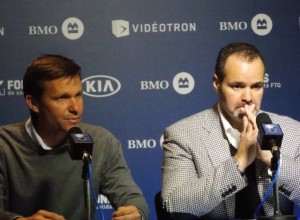 Summoned to Saputo Stadium on short notice, media members assembled this morning and were told that head coach Jesse Marsch was no longer with the organization.

Team President, Joey Saputo, already on the record as being satisfied with Marsch’s efforts over the team’s inaugural season, sat alongside Technical Director Nick De Santis and the former coach for the announcement, saying that it was neither a firing or a resignation but rather “an amicable parting of ways”.

“Although the decision was a tough one to make it was made mutually for the benefit of the club. We told you on Wednesday that we were happy with Jesse’s work this year and we are still satisfied today,” Saputo reiterated.

“I think that naming Jesse as head coach for the team’s first MLS season was the right decision to take. Jesse has always had the club at heart and gave his maximum towards helping the team achieve success. I’d like to thank him for his involvement and commitment to the Montreal Impact. While we have the same long-term objectives for this organization we realized over the past few weeks that we do not share the same philosophy on how to get there,” he continued.

The team will begin its search for a new head coach immediately without nominating an interim head man.

“I think we are in good hands with the assistant coaches, Mike Sorber, Denis Hamlett and Mauro Biello as well as Philippe Euffaffroy, in charge of the Academy and head coach of the U21 side, who will also accompany the team on the trip to Italy next week,” said Saputo.

“Good morning everyone,” began Marsch’s statement. “Like Joey said, I’m leaving the club by mutual agreement. This is first and foremost a question of respect. Respect for the club, what it has accomplished and where it is headed in the future.

“I had several discussions with Joey about how we could make it work and the conclusion was that this amicable split is the best solution for the club going forward, ”He continued.

“Looking ahead, we realized that although we had the same goals, we did not share the same philosophy. I’m extremely proud to have been a part of this organization and I’ll always be grateful to Joey and Nick for giving me this great opportunity. I also want to thank the coaching staff and the extended staff and all the players for the commitment that they’ve shown through the season .

“Lastly I’d like to thank the fans and the people of Montreal because the way I’ve been received and my family has been received has been top-notch. I’m indebted to this wonderful city. Thank you very much. Merci beaucoup.”

Asked whether the difference of opinion had anything to do with the coach’s relationship with the Italian stars that joined the team after the season got underway, something that was denied when the Impact season post-mortem was held earlier in the week, Saputo hinted that it might not have been the only issue where the coach and the team disagreed.

“That might have been one of the reasons but I’m not saying it’s the only reason,” he said. “Because when you look at the big picture it’s certain that there are some things that could be changed, that we could work on together but unfortunately we saw that it would be more difficult to do it on a long-term basis.

“With Jesse, looking at what he’s done, along with his staff up to this point, I’ll say it again, we made the right decision. I think Jesse and his staff served us very well, but having said that, we saw that as a club, in terms of vision and philosophy, we have a certain outlook,” said De Santis, who was quick to add that the mood between the dissenting sides was always cordial.

“We always went about them in a very professional manner and the differences were never communicated to the dressing room. In the end we maintained a sense of mutual respect,” he said.

When it came time to field a few questions Marsch was a lot more close-mouthed than he has been in his interactions with the media since taking the team in charge.

Asked if he has any plans for the future, be it rejoining the U.S. national team or hooking up with another MLS side, Marsch simply answered, “No, not at all.”

Did he feel that he had the support of the upper echelons of the organization throughout the season?

“Yeah. You know, we pushed this thing and I agree with everything they (Saputo and De Santis) said.”

Asked if he felt that he had the support of the largely Italian contingent of players brought in after the season got underway, Marsch’s comment was a curt “I’m not going to comment on that.”

The Impact challenged for the playoffs until the 32nd game of the 34-match regular season and Saputo was asked if things might have unfolded differently if the team had made the postseason.

A few Impact players were solicited for their reactions as they left the playing field.

Matteo Ferrari, one of the aforementioned Italians said that Marsch’s departure came as a surprise but perhaps not that big a one.

“Probably they were thinking about a different kind of football than Jesse proposed during the season. Personally, with the team we have I think we should have gone into the playoffs. Maybe the club was thinking like I think but that doesn’t mean that the fault is all Jesse’s. We did well but not well enough so probably the club, with Joey at the head, decided to find a different way for next season. “

Asked about possible friction between the Italian imports and the head coach, Ferrari minimized the influence he and his countrymen may have brought to bear.

“We are just part of the team. There is no difference between us and the Americans or Canadians or Africans so it is not just the Italians. My relationship with Jesse was very good and open. We talked a lot. I was surprised but these things happen in soccer.”

Fellow defender Hassoun Camara also claimed the move came as a surprise, saying, “We learned it this morning the dressing room. We had a meeting with Joey and Nick, who told us that Jesse was not with the club any longer. It’s a decision that the staff took and as players we have no choice but to accept it. These are things that happen in sport, whether you’re a player or part of the technical team’s not the first or last time something like this is going to happen.”

Assistant coach Mike Sorber, who had not spoken to Marsch, admitted coming to Montreal with the goal of working with his U.S. national team cohort, also offered his impressions.

“I think there are two parts, that you come with your qualities and your abilities and you do your best every day that you come to the office or into the dressing room or onto the field and you put those qualities out front. That’s what I did every day. Unfortunately for Jesse and for the club something went down and there was a difference there. The club has said that they think I’m still an important part here and so I can only continue to put my best foot forward and try to make this team successful,” said before addressing the rumours of a rift between his former boss and a segment of the playing personnel.

“I wouldn’t say there were tensions But tough decisions have to be made throughout the year when players play and when certain players don’t play. A lot of those situations can be blown out of proportion,” he submitted.