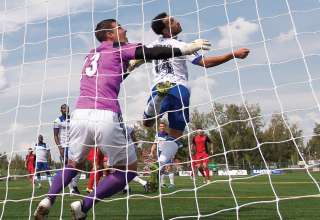 John Smits has emerged from the University of Toronto to become one of the best keepers in the NASL. In 2014, he enjoyed a breakout season with the Eddies…

John Smits has flown into San Antonio for the NASL championship game. On Soccer Bowl Saturday, he’ll be on the field.

But, sadly, he’ll be on the field only as a dignitary. He’s not in Texas to play in the NASL’s marquee game. After clawing its way back into the playoff picture and finishing the season with a seven-game unbeaten run at home, Smits’s FC Edmonton side was eliminated from the NASL post-season race with two games to go in the regular season.

He’s been sent to San Antonio so, at halftime of the big game, he can receive the league’s Golden Glove Award and shake a few hands.

The prize goes to the keeper with the lowest goals-against average in the league, who has appeared in a minimum of 15 games. Smits finished the year with a 0.90 GAA, which allowed him to be the first Canadian to ever snag a major individual post-season award in the history of the modern NASL.

Smits is 26 — and he’s still an unknown to many in Canadian soccer circles. Growing up in Mississauga and playing for the same Erin Mills junior team that featured future Blackburn Rover and Queens Park Ranger Junior Hoilett, Smits was never part of a national U-17 or U-20 team. He played soccer at the University of Toronto, and those who go to the CIS to play are often satisfied to see their careers end once they graduate. It is not a place that often produces professional players.

But, Smits was brought into the FC Edmonton fold in 2012. In 2011, the team had to play an amateur goalie because of an injury crisis. Then-director of soccer Joe Petrone pledged that the team would never get caught short in goal again, and decided that FCE needed to have four keepers, to ensure that it had depth at the position.

Lance Parker, who had played in Major League Soccer with the now-defunct Chivas USA, was in the mix. The team also signed Michal Misiewicz, who wowed as the starter for the Canadian U-23 team at Olympic qualifying. And, ex-Toronto FC keeper David Monsalve was also an Eddie. Of the four keepers brought in for the 2012 season, Smits was clearly No. 4 on the depth chart.

But Monsalve began the season with a nagging injury, and Parker was rehabbing from a compound fracture to his arm suffered in a 2011 game against the Carolina RailHawks. So, Misiewicz began the season as the starter. But, after some solid road outings, Misiewicz struggled in the Eddies’ home opener, giving up four goals, spilling rebounds and consistently getting caught out of position. It would be the last game  Misiewicz would ever play for the Eddies.

Monsalve came back, got into a couple of games, but coach Harry Sinkgraven decided that he needed to have a look at Smits. On May 12, 2012, the man who started the season as the No. 4 choice keeper got his first professional start. He responded with a clean sheet in a win at Atlanta.

After the match, Smits’ tone was defiant.

“Before the game, I knew this was a chance to make a statement to North America that CIS can produce a lot of great players, and we’re often overlooked,” said Smits. “It was a very emotional game for me. There needs to be some kind of draft system for us in North America.”

While coming from CIS to the pros is rare, it’s not unheard of.

Former Trinity Western star Paul Hamilton, now retired, was a member of the NASL’s Best XI. The University of Saskatchewan’s Paul Craig played two seasons with the Eddies and then moved on to indoor soccer’s Rochester Lancers. Gagandeep Dosanjh, who was a key part of the University of British Columbia’s national-title run in 2012, was signed by the Eddies in 2013. But knee problems derailed his career.

Now, while in San Antonio to accept the Golden Glove Award, Smits thinks back to that first pro start back in Atlanta.

“I remember the first interview I did with you, after my first win in this league, and I said I wanted to show that CIS players can play. Now I think we can be successful in the top leagues, in North America, especially.”

Parker came into the 2014 campaign as the No. 1, but suffered finger and shoulder injuries that, save for a few starts in the fall, pretty well obliterated his season. Smits stepped in — and took the No. 1 job. At the end of the 2014 season, Parker was told that he

wouldn’t be back with the Eddies

“When it comes to other players and their contracts, that’s none of my business,” says Smits. “But [Parker] sent me a great text message after his exit interview. He was a great starter. I’ve learned so much from him. He’s the most professional player I’ve ever met, from the way he takes care of himself to his nutrition to how he trains.”

But that’s not to say Smits’s play has been perfect — no keeper can expect perfection. He knows that he needs to work on his distribution. And, in the fall season, he had issues in a couple of games where he spilled balls he should have caught — and, on two occasions, those muffs led to situations where he fouled attacking players and surrendered penalty kicks.

But, Smits is a good decision maker. He is great at recognizing the threats on an attack, and coming off his line quickly to take the shooter’s angles away. He is strong at making himself big and forcing the attacker to make a quick decision.

And Smits’s play was a big part of FCE’s push for a post-season spot. In NASL, four teams make the post-season. The top two seeds are awarded to the spring-season winner and the fall-season champ. The No. 3 and No. 4 seeds go to the teams with the next-best overall records in the league.

“As everyone saw, the big change came in between the spring and fall seasons,” says Smits. “We brought in some new players and they really injected some life into us. Then we started scoring goals for fun and keeping the ball out of the back of our net.”

Chad Burt and Cristian Raudales, both free agents, shored up the midfield. And Beto Navarro, who was frozen out of the Atlanta Silverbacks over money issues, was bought by the Eddies. The three players strengthened the spine of a team. All of a sudden, the Eddies went from a team that was one of the league’s best defensive teams but couldn’t score to a team that was still tough in the back, but could now find a couple of goals a game.

With Smits in goal, the Eddies pushed for the No. 4 seed; the Eddies finished with the third-best record in the fall season, only six points back of the San Antonio Scorpions. But, thanks to the weight of a poor spring-season record, the Eddies fell short of the post-season.

Yet, with two weeks left to go in the fall season, the Eddies were still alive, but needed to get a result in Fort Lauderdale.

Smits kept the Eddies in the game, making a series of exceptional saves — including a ridiculous arm stop on Fafa Picault. When Picault got the ball, he had Smits at his mercy. But Smits reached back an arm and was able to deflect the shot off the bar.

Soccer, though, is an exceptionally cruel game. One error can chnge a match. And, after a defensive miscue, Smits came off his line to retrieve a ball. But his panicked kick saw the ball go right to Strikers’ midfielder, Pecka. He was able to take the poor clearance and chip the ball over Smits. Final: 1-0 to the Strikers, who would eventually go on to face the Scorpions in the Soccer Bowl.

But, with Smits in goal and NASL Best XI left winger Lance Laing re-signed — the Eddies will be seen as one of the darling picks for 2015. With a seven-game unbeaten run at home to finish the season, the Eddies have now made Clarke Stadium a fortress.

And teams will know that the Canadian in goal has made his mark for as the stingiest keeper in the league.