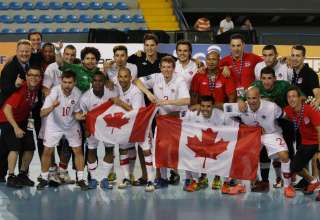 Kraig Chiles,the two-time MVP for the Sockers team that went undefeated during the Professional Arena Soccer League season and won the world title at the FIFRA championships in Mexico, rocketed a shot under the bar to give the Americans a 3-2 win over Canada at the CONCACAF Futsal Championship.

The loss drops Canada‘s record to two losses in its first two group-stage games in Guatemala, and all but mathematically eliminates the Canadians from having any hope of reaching the elimination rounds.

Canada applied some furious pressure on the American goal in the final three minutes, with Matthew Rios failing to convert a golden chance in front of goal and former Toronto Lynx Robbie Aristodemo smashing an attempt off the post.

“We played very well, we worked hard,” said Canadian coach Sipho Sibiya over the phone from Guatemala after the game. “Had we been able to bury some of those chances we had in the first half, might have been a different game.”

Canada began the match well enough. Bruno Xavier smashed a free kick that deflected through a wall of Americans to give the Canadians a 1-0 lead.

But, late in what was a very cagey first half, Patrick Healey equalized off a goalmouth scramble.

Bryan Perez scored on a two-on-one to give the Americans a 2-1 second-half lead, but Ian Bennett equalized for Canada shortly after. That set the stage for Chiles, who showed us that you can take the skills from the boarded version of the indoor game to the futsal arena.

“Hopefully the CSA keeps this program going, so we can develop these players and learn the game,” said Sibiya.

Sibiya had just four days worth of training with his team in Costa Rica before they had to head to Guatemala for a qualifying series with El Salvador, then to the tournament proper.

“We are a brand-new team,” he said. “We’ve only been together a short time and we’re competing against teams in CONCACAF that have played together for years.”

And the Canadians will face Panama on Wednesday. “We want to get the win. Our goal was to qualify for Thailand,and we want to finish the group stage strong, with a win. It looks like it all might come down to the last day.”