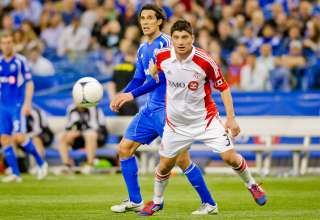 A key injury to a defender at Chilean side Huachipato had a domino effect that went all the way to Toronto FC. On Thursday, TFC announced that the club and defender Miguel Aceval had agreed to terminate his contract by mutual consent.

In fact, as the release went out, it was already news in Chile that Aceval had signed a deal with Huachipato. According to Chilean soccer site Prensa Futbol, Huachipato left back Daniel Rodriguez was hurt, forcing the team to look for a left-footed replacement — and Aceval fit the bill.

Aceval was signed out of training camp this season, and registered two assists in five MLS games. He also scored in the CONCACAF Champions League against Santos Laguna. In fact, his left-footed delivery of set pieces will likely be his most-remembered asset as a member of the Reds.

What won’t be remembered is the fact that he struggled to match the pace of the MLS game. And, of course, Aceval was part of a trio of players who was arrested last month in Houston for public intoxication.  Of the three, only Luis Silva remains a red.

Aceval’s guaranteed compensation, according to MLS Players’ Union figures, was close to US$200,000. But, because he was released by mutual consent — and has found a new club for which to play, TFC is freed up of about half of the cap hit, as Aceval spent just a little more than half a season with the club.