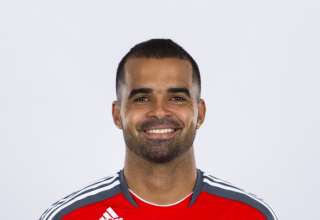 Maicon Santos... scored the winning goal after coming off the bench

Toronto FC still has a ways to go before it perfects the attacking, pass-heavy, Total Football-esque style that Aron Winter has tried to implement in his first few months as the club’s head coach. Saturday’s 2-1 win over the Houston Dynamo, however, is the clearest example yet that Winter’s style may be starting to take hold with his team.

In an entertaining game that got the 20,259 fans in attendance at BMO Field increasingly more fired up, the Reds justly picked up their second league win in what was clearly their best performance of the young season.

TFC’s all-new strike force paced the attack and, until an 87th minute strike from Houston’s Lovel Palmer, the back line also performed well. Winter cautioned against seeing this match as a breakthrough for his side, but was pleased with both the result and how the Reds played.

“It was one of our better games but we’re still rebuilding,” Winter said. “But I am satisfied about the way we reacted, especially after that last game against Seattle…I am very happy, not only about the team spirit, but also the way we played.”
The effects of that last league game, a 3-0 loss to the Sounders last weekend, were still apparent in the Starting XI that Winter sent to face the Dynamo. Regulars like Danleigh Borman, Dan Gargan, Ty Harden and captain Maicon Santos were on the bench, while neither of TFC’s leading scorers were available —Alan Gordon was out with an injury while Javier Martina didn’t even dress.

Though Winter has had to be canny with his usage of players given TFC’s congested schedule (the Dynamo game was the fifth in a stretch of 11 games in 36 days for Toronto), he noted Martina and Santos didn’t play specifically due to their lack of recent form. With so many lineup staples out, it created room for several new faces.

Joao Plata and Richard Eckersley made their first league starts for the Reds while forward Nick Soolsma saw his first MLS action since he started the season opener in Vancouver. All three had played in both legs of TFC’s victorious Nutrilite Canadian Championship first-round tie over FC Edmonton, with Plata and Eckersley looking particularly impressive in starting roles.

The new Starting XI looked like a good move in the early going, as the Reds controlled much of the first half. Toronto’s closest chance came in the 11th minute, when a clever backheel pass from Plata to fellow striker Alen Stevanovic started a play that resulted in a hard strike from Julian de Guzman. From 30 yards out, de Guzman sent a rocket to the top half of the net that Houston goalkeeper Tally Hall had to jump to knock over the bar.

Though TFC didn’t score in the first half, the opening 45 minutes were punctuated by Plata’s high-energy runs on the left side and Eckersley’s equally dangerous runs down the right from the back line. Twice Eckersley nearly connected with Jacob Peterson on crosses in front of the net — on the first Peterson’s header went wide, and Hall was able to intercept the second before Peterson could slide in for the finish.

In the 50th minute, Toronto finally broke through. Soolsma was fouled in the box by Houston defender (and Canada international) Andrew Hainault, earning TFC a penalty kick. Plata was chosen to take the shot, and the 19-year-old Ecuador native made no mistake in burying the ball in the top left corner. It was Plata’s first MLS goal, and his first in any competition since scoring on September 18 while playing for LDU Quito of the Ecuadorian Serie A. He celebrated his score by racing to the sidelines and giving Winter a big hug.

“Before the game, I said if I scored a goal I would dedicate it to the coach in response to the confidence and the trust he’s had in me,” Plata said via a translator. “I was very happy and I wanted to acknowledge and the goal was for him.

“When I’m talking with [Winter], he’s always saying whenever I’m one-on-one, I need to go for the play to try to take my man and not to be afraid of risking it to try to make the play. That’s what I tried today and we got a positive result for the team.” Plata looked primed to receive another penalty kick in the 60th minute, when his charge into the box was interrupted by Hall and referee Jorge Gonzalez showed the ‘keeper a yellow card. However, after consulting with the linesman, Gonzalez waived off both the foul and the booking since Plata was ruled offside. The non-call looked like it could have been a critical moment, since the Dynamo began to show the away form that had given it a six-match road unbeaten streak (4-0-2) dating back to last season.

Winter responded by substituting Matt Gold into the match for Peterson to beef up his club’s defensive side while also making a striker-for-striker sub of Santos for Stevanovic. The second substitution ended up being the more productive for TFC, as Santos scored what ended up as the game-winner in the 82nd minute. Again it was Plata who was wreaking havoc on Houston’s side of the field, this time coming down the left side and challenging Hainault. Plata took a heavy tackle from the defender but still managed to get the pass off to Santos, who got into the box and fired a shot inside the right post.

You would think that Santos’s third goal of the season (his fifth overall counting his brace against FC Edmonton in NCC play) would be enough for him to regain his starting job, but given how the new forwards performed, it isn’t a certainty. Plata seemed to turn himself into a BMO Field folk hero over the course of the game, and received a deserved standing ovation when he was subbed out during stoppage time.

“Plata has done very well and I was very happy that he made the penalty,” Winter said. “You have to be careful with those players because he’s very young and it’s a very tough league. Today he had the opportunity to play [almost] 90 minutes.”

TFC’s strong performance should earn most of the newcomers more playing time, and not just because of the fixture congestion. As more players get into the mix, however, the common goal of the entire team is to not just perform well as individuals, but to adapt that play into Winter’s system.

“Every minute we play we’re getting closer and closer,” said Eckersley. “It’s not just on the ball, off the ball as well we’re winning the ball back quickly and not giving them any space to play into. That’s crucial to the system we want to play. I just want to keep my head down and keep working hard, trying to improve myself and letting the coaches improve me.”