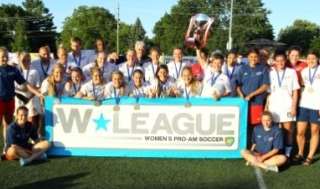 It’s been a long time coming for the Ottawa Fury, but finally being crowned W-League champions was worth the wait.

Ashley Seal scored in injury time in the 90th minute to tie the game and the Fury went on to win over the Pali Blues Sunday afternoon at the Algonquin College Soccer Complex after the teams stood at 1-1 after extra time. The Fury won 4-3 on penalty kicks.

The referee said after the game the Melissa Busque had scored the late goal, but it was Seal who put the ball in the back of the net according to Fury coach Dom Oliveri and his players.

“There’s no better feeling and guess it feels even better because of what we’ve gone through to actually make it to this point,” Fury owner John Pugh said.

“We’ll take the win on penalty kicks, thank you very much. I’m feeling pretty good and I think the city should feel pretty good. It’s not often we win a North American Championship. I want to thank all the fans for coming out and really supporting us and getting us through this.”

Sunday’s game was the Fury’s fourth time in a championship. After extreme success during their 13 regular seasons, they can now say they are champions.

Kelly Conheeney took the final penalty kick and buried her shot past Anna Picarelli to finally give the Fury a title they had so frequently been denied.

“It’s my first year on the team and I’m one of the youngest players, but I said I’ll take it,” Conheeney said after learning coach Oliveri had selected her to take the final kick.

“I just jogged in there and it was the best feeling in the whole entire world. I didn’t have any tears because I think I sweated them all out.”

“As a ‘keeper I don’t expect to save anything in a PK shootout, if I do I get lucky,” said Picarelli, the W-League goaltender of the year who backstopped the Blues to an undefeated season before Sunday. “It’s unfortunate that this season we didn’t put it all together. All that work that we did up until now doesn’t mean anything if you don’t win in the final.”

The Fury had several opportunities to tie the game after Nikki Washington had given the Blues a 1-0 lead in the second minute. Forward Mallory Outerbridge had some chances of her own, including one in the 38th minute when she hit the post despite being alone in front of an open net after getting a nice cross from Woods.

All is forgiven however, after the heroics of her teammates, starting with Seal.

“I don’t know about heroics, I was just there to put the ball in the back of the net,” Seal said.

“It felt amazing. It was kind of a surreal moment and I was so happy it went in the back of the net and we could keep going. It was a pretty good day.”

It was a championship day.