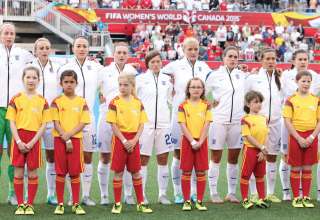 A group of volunteers rolled a circular podium onto Commonwealth Stadium’s playing surface. English players raised coach Mark Sampson into the air. Meanwhile, in the media area, a German journalist scoffed: “The ceremony nobody wants. The game nobody wants.”

The third-place game at the World Cup, be it women or men, is always the most maligned match of the tournament. Critics will say it has no place in the schedule. Both of the semifinal losers had their hearts broken, why subject them to an extra game?

England’s 1-0 win over Germany perfectly showcased the conflicted emotions the world of soccer has about the third-place match.

England’s players were euphoric after Fara Williams buried her game-deciding penalty kick in the second half of extra time.

And, German coach Silvia Neid was clear in her assessment of the match.

“Today, they really wanted it.” She wasn’t speaking about her team, but about the English opposition.

Both Germany and England had found meaning in the game.

And Sampson said that whoever won the Germany-England game would lay claim to the title of best European side at the Women’s World Cup.

“They were determined to make sure that the last chapter of this story was, England win,” Sampson said after the game. “We never used the words third and fourth playoff. We didn’t feel that befitted this team they way we performed at this tournament. We were playing the greatest women’s football nation of all in Germany. This team, this nation, have had 25 years of hurt and more against Germany. It was about time today that a team stepped up and found a way to start the ball facing in a different direction.”

And Neid said that her team wanted to use the game as a chance to build, to learn from the mistakes made in a 1-1 draw with France that saw the Germans win in penalties, and then a 2-0 semifinal loss to the United States.

“It wasn’t very difficult [to prepare for the third-place match],” she said. “We were quite sad for one night and one day. Then, we looked at how we could improve.”

But, despite the brave words from the coaches and the enthusiasm of the English, there fact is that only 21,843 came out for the thirdplace match, about 10,000 less than had come out to see England lose to Japan in the semifinals. When the coaches went to the press conference room, there were only 19 journalists on hand, about a quarter of the number who had been there when Japan faced England in the semifinal.

So, as important as it was to the players, it’s hard to make a case that it’s all that important to the soccer world as a whole.

The match kicked off with a stink in the air. The wind carried the smell of forest-fire smoke into Edmonton’sCommonwealth Stadium; the raging blazes in neighbouring Saskatchewan blessed the third-place game with haze. The best scoring chance of the first half was, the product of a comedy of errors.

Just a couple of minutes after kickoff, England defender Steph Houghton cleared the ball off the line after Jo Potter had collided with keeper Karen Bardsley. The ball spun off Bardsley — and Houghton saved what would have been an embarrassing own goal.

It took till the second half till we saw our first real moment of brilliance, with Bardsley being forced into a great, diving stop after German forward Sara Däbritz side-footed a half-volley off a great cross from Celia Sasic.

Then, we saw Tabea Kemme dance through four English defenders — none of them wanting to risk putting in a tackle — before blasting just wide.

Finally, mercifully, in the second half of extra time, Kemme was whistled for holding onto English sub Lianne Sanderson; the ball was nowhere close to either player. Goalie Nadine Angerer dove the wrong way; Williams converted from the spot, and England got its goal — and the, ahem, honour of third place.

“The penalty shot was completely justified,” said Neid. “We were very naïve.”

Bianca Schmidt had a chance to equalize, missing an open goal

with a free header. And, it was fitting, maybe, that the last significant act of the game was a flub.

We all know the score: The World Cup isn’t the Olympics. A third-place game doesn’t carry the same weight as a bronze medal match, even though the English players did get to dance on a podium and got medals to hang around their necks.

So, the question, should the third-place game continue, so we can see teams like England — who recovered from a heartbreaking 92nd-minute own goal from Laura Bassett that cost them the semifinal against Japan — have the chance to finish the tournament with a bit of glory? Or, is it like the German journalist said, the game no one wants?