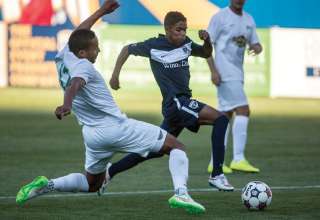 Chaim Roserie can’t remember when he moved to Canada — he was that young.

The 16-year-old soccer phenom was born in Brooklyn, N.Y. and raised in Mississauga,

Ont. He’s a dual citizen. In 2014, he used his American passport to his advantage, snagging an invite to train with the prospects who were looking to latch on with the Jacksonville Armada, the North American Soccer League team that began play as an expansion team in 2015.

In fact, the Armada got off to an auspicious debut, with a goal just 12 seconds into its first league game, a 3-1 win over FC Edmonton. That goal set a new record for fastest goal from the kickoff of an NASL match.

Soon after that first win, Armada took a leap of faith when it came to Roserie. The team signed the 16-year-old to a professional contract. But Roserie can’t yet pay dividends to the team. Because of FIFA regulations, he actually won’t be available to play in an NASL game till he turns 18. Roserie says that, because his parents continue to live in Ontario, he can’t play league games for the Armada while he’s a minor, even though he is a dual citizen. But, being under contract, he can train with the first team and play in friendlies — including a recent match against Argentina’s Boca Juniors.

According to a statement from the Armada that was made when the signing was announced: “Roserie, who was invited to try out and has been training with the team since last August, will not be eligible to play in official matches for the Armada FC until clearance is received from FIFA due to the fact that Roserie is a minor.”

But the question, why did Roserie go down to Florida to try out for an NASL team, and not gravitate towards teams in the Greater Toronto Area? He says it’s because he was no longer interested in playing for youth teams. He didn’t want to play against other boys — he wanted the chance to test himself against men.

Before coming to Florida, Roserie played for the Mississauga Falcons and the West Toronto Cobras. But, to most Canadian soccer supporters, he remains somewhat of a mystery. He has yet to play for Canada at the youth level.

And, things aren’t looking good for Roserie to play for Canada in the future. Roserie confirms that he has turned down two separate invitations to join the Canadian national U-17 program. Instead, he looks to again use the dual citizenship to his advantage; he will soon be off to an American U-17 camp. He is clear about in his hopes to represent the United States in the future; this isn’t a case like Teal Bunbury, where the player says he wants to represent Canada, then goes and accepts an offer to play for the States.

If he makes the American squad, he’ll be a dual citizen at that time. So, there is still hope in the future — at least according to current FIFA rules — that he could still choose Canada in the future.

You can switch if you meet the following condition; that you were a citizen of the country for whom you want to play when you appeared for the youth team of the country you no longer want to represent.

“Basically, it’s better for me to play with the Americans than with Canada. The Americans play a possession style that suits my game, not the kick and run, which is more what Canada plays.”

And Roserie did get the chance to show off that potential. Near the end of June, when the Armada played Boca Juniors. Late in the game, Roserie made a clever back-heel pass that led to a goal from Jacksonville teammate Ramak Safi.

“That experience was so incredible. It was really special to see such a big crowd and, when we scored the goal, that was one of the best celebrations I’ve ever had. Playing against such a big team, sure I was nervous but I also wanted to go out and play my game.”

The move to Florida has meant that the kid has had to do a lot of growing up. As mentioned earlier, his parents remain in Ontario.

And, that means Roserie has to adjust to life as a professional without his mom and dad to come home to at night.

“It’s better now,” says Roserie. “At the beginning, I was homesick a lot. I called them every day, to make sure they were OK. But. now, my brother (who is 19) is staying with me. I have my own apartment now, and he’s staying with me as he wants to go to university here.”

Roserie hopes to move even further away from Mississauga.

“Well my long-term goals is, to be honest, to continue to improve. Even though I can’t play it games right now, it doesn’t change my mindset. I want to challenge myself. I can see myself going to Europe, one day.”